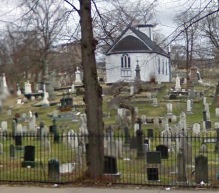 Police have charged three males after headstones were damaged at a South End Halifax graveyard.

At 8:00 pm Halifax Regional Police responded to the grave yard located at 1259 South Park Street in Halifax. A witness had contacted police after observing three males in the graveyard. The males fled upon police arrival and were apprehended a short distance away. Officers noted damage to some headstones and grave markers. The three males, two adults and one youth, are facing charges of Mischief in relation to religious objects, they were released to appear in court at a later date.