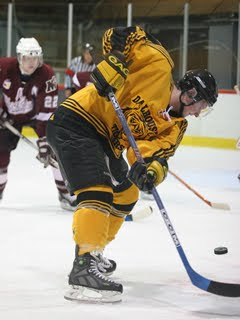 Tigers have Mixed Results in Home Openers; Women’s Basketball Continues to Struggle in Exhibition.
This past weekend the Dalhousie Tigers had tripleheader action on ssncanada.ca. The men’s and women’s hockey teams held their AUS home openers, while the women’s Basketball team finished off the Subway tournament playing host to the Brock Badgers.
AUS Champion Huskies Beat Scrappy Tigers; Nadeau Brilliant in Defeat.
On Friday night, Pete Belliveau’s rebuilt Dalhousie Tigers men’s hockey team welcomed cross town rival and defending AUS champs, Saint Mary’s, to the Dalhousie Memorial Arena.
The Huskies were looking for a measure of revenge after the Tigers whipped them 7-2 in exhibition play a few weeks prior.
Head Coach Trevor Steinburg entered the game having just signed a 5 year contract extension, and the Huskies having all the principles from last year’s championship team back, including the reigning AUS MVP Marc Rancourt.
SMU came out the aggressor looking for an early lead, but they were turned away time and again by the Tiger’s goaltender who has become the early storyline of the Dalhousie season;
Bobby Nadeau.
The Huskies would score the first goal of the game with 2 minutes left in the first period, but not before Nadeau would turn away over a dozen shots, including several high quality chances.
The teams would exchange goals twice with SMU outshooting Dalhousie 43-26. The game seemed destined for overtime as the game clock was about two tenths of a second from expiring.
That’s when Tiger’s defenceman Josh Manning hit a Saint Mary’s player on the helmet with his stick. Manning received a minor penalty and the Tigers began overtime shorthanded.
Cam Fergus would score the game winner a minute later, helped by Rancourt’s third assist of the night, and Saint Mary’s would hold off a scrappy Tigers team that nearly pulled off the season’s first upset thanks to the stellar play of Nadeau.
Patrick Sweeney and Kenzie Sheppard scored for Dalhousie, with Francois Gauthier assisting on both goals.
The Tigers are now 0-1-1 after losing to Saint Francis Xavier on Saturday night, 4-2. The team’s next game is Friday, October 23rd at Moncton.
Tigers Begin Season with Big Home Win over Tommies
Lesley Jordan has been trying to get her Dalhousie Tiger’s hockey team over the hump for several years.
On Saturday night at the Dalhousie Memorial Arena, the Tigers took the first step, beating a St.Thomas team that finished 8 points ahead of Dalhousie in last year’s standings.
The storyline of the game was the power play, Dalhousie scoring the first two goals on the advantage. Kaitlyn Mcnutt scored the opening goal in the latter stages of the second, and Rebecca Sweet added the game winner early in the third.
Jillian Coughlin brought the Tommies to within a goal halfway through the final period, but Ashley Boutilier would shut the door, stopping 26 pucks en route to the Tiger’s first victory of the year.
Boutlier made the biggest play of the game, turning away Coughlin on a penalty shot late in the second period.
The Tigers would lose the next day in Moncton to the AUS champion Blue Eagles by a score of 2-1 to tie their record at 1 win 1 loss.
The Tigers next game is Friday, Oct. 23rd, as they host the second game of the 2 game set with the Blue Eagles. That game can be seen on ssncanada.ca at 7:00.

Tigers Continue to Struggle at Dalplex
Head Coach Anna Stammberger may not be too excited the next time she spots ssncanada.ca covering her Dalhousie Tigers women’s basketball team.
For the second straight week the ssncanada cameras have been rolling as Stammburger’s Tigers were beaten soundly by visiting Ontario schools.
Last week the Tigers served up a turkey on Thanksgiving, losing to a very average Carleton team 58-48.
This past Sunday, a day after a big victory over York, the Tigers closed out the Subway Invitational Tournament in embarrassing fashion, as the Brock Badgers dismantled them over the course of 4 agonizing quarters for Stammberger and her players.
Dalhousie would score only 58 points in a 20 point drubbing at the hands of a Badgers team that had an easy time on a beautiful Sunday afternoon in Halifax.
The Tigers would trail 63-35 midway through the 3rd quarter, as the Badgers continued to press the Tiger’s youthful and inexperienced backcourt.
Brock finally took the foot off the pedal near the end of the quarter, and Dalhousie would close out the game by outscoring the Badgers in the 4th quarter.
3rd year forward Brooke Sullivan from Miramichi, NB, was named player of the game for Dalhousie.
5th year post Leah Girdwood was named a tournament all star, bouncing back from her foul laden performance the previous week vs. Carleton.
The Tigers will look to get on track with a trip to Moncton for the annual Don Grant Classic. Dalhousie will play Ottawa, Mcgill, and Bishops.
Observations from the Broadcast Booth
Assistant Coach of the Women’s basketball team, Dani Everitt came over for an interview during halftime of Sunday’s game vs. Brock. When asked about her team’s struggles, Everitt said that the Tigers are “storming”. This is a reference to a great basketball quote regarding the development of a team throughout the season. I first heard it from Jerry Hemmings, the legendary Brandon Bobcats coach. The expression suggests that each basketball team goes through four stages in a season; forming, storming, norming, performing. Most teams that have lost or added players and gone through a coaching change are going through the forming/storming stage at this time of year…..Alyssa Hennigar did not play for the Tigers hockey team over the weekend. The 3rd year defender is a key part of the Tigers power play and brings energy and physical play…….The Dal Memorial Arena was still buzzing about Bobby Nadeau’s performance the next night at the women’s game. Nadeau stopped 45 pucks….Brooke Sullivan is playing solid basketball for the Tigers. She’s become a legitimate three point threat and a high energy player who is tough on the boards…..Meghan Wiggins, 1st year player from Fillmore, Saskatchewan, was stellar in spots in Sunday’s loss….the Men’s hockey team seemed to be bullied a little bit by the Huskies, who were definitely the aggressor. Ryan Jenner and Benoit Gervais did take it upon themselves to bring some physicality to the Tiger’s attack. Jenner appears to be the guy who is going to stick up for teammates……Alot of confused and bewildered Tiger’s fans at the Dalplex on Sunday. Many watching couldn’t remember ever seeing the Lady Tigers getting beaten that bad on the basketball court. The Tigers are desperate to get 3rd year leader Alex Legge back on the court. The dynamic Legge would bring a lot of stability to a youthful backcourt that could really struggle against physical teams like Memorial and X next month. In an interview at halftime on ssncanada.ca, Legge said she did not expect to return until second term.