I first mentioned that Lawtons started carrying Too Faced back in September last year. The Shadow Insurance was of course the first thing to sell out, but others weren’t. About a month or two ago, the stuff was on for half off. I waited, and last week, they became 75% off. So if you are in the Maritimes and have seen Too Faced in your Lawtons, check back now.

The very first thing I got was the Galaxy Glam baked eyeshadows, CAD4.75 each. I always wanted to get them, but couldn’t justify the full price of CAD19. There they are in the pictures with and without the plastic packaging. They are too pretty, and the swirls well suit the name 🙂 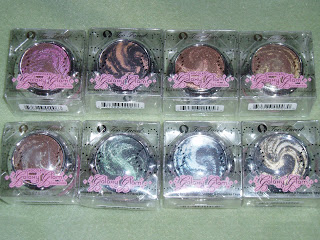 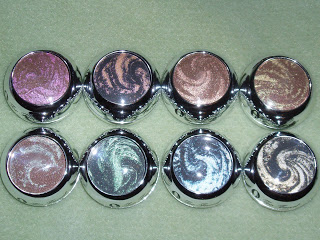 I could have swatched them for you, if they aren’t too pretty to touch. I’m sorry ladies, I’d need some time to just stare at them in their pretty little domes until I could bring myself to put a dent to their surface 🙂 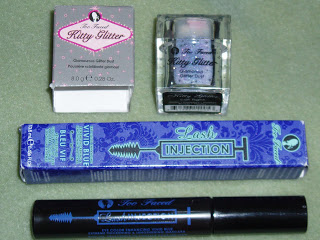 There were single and duo shadows, glitter liners, lipglosses and lipsticks on the shelf too but I didn’t seem to care for them much.

The other things I picked up were a Kitty Glitter (Glamorous Glitter Dust, CAD2.99), and a Lash Injection (Vivid Blue Extreme Thickening & Lengthening mascara, CAD4.75), pictured with their packaging.

I’m on a mascara kick lately, after the experience with the Physician Formula Shimmer Strips mascara. Very curious of how this mascara works.

I had to go to 3 different Lawtons to collect all 8 of the Galaxy Glams, but it was worth it. Can’t help it 🙂 Hope you ladies had a good weekend.