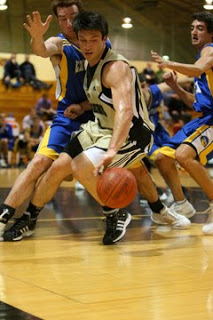 Simon Farine’s Tigers were painfully mediocre in the AUS this season.

The first of a 4 part series counting down the top 20 storylines in the AUS this past year.
20. Dalhousie Tigers Men’s Basketball: Epitome of a Middle Tier Team.
The defending AUS champs may have been the most average team in AUS basketball history. The Tigers were an outstanding 11-1 vs. the bottom tier of the conference, and an equally dismal 1-7 vs. the upper tier featuring CBU, X, and SMU.
To their credit, the Tigers did lose a heartbreaker to the Huskies at home, and then rebound to beat SMU 72-59 a week later at the Tower. However, Dalhousie was a woeful 0-6 vs. the Capers and X-Men, each loss by double digits.
In an interview last week on CKDU Sports, Head Coach John Campbell said that toughness and athleticism will be the focus of recruiting for next season. (http://live.haligonia.ca/halifax-ns/sportsblogs/173-sports-video/9743-john-campbell-of-the-dalhousie-tigers.html)
On a positive note, senior Andrew Sullivan was named the 2010 CIS Ken Shields Award Winner for outstanding student-athlete and community service.
19. The Slightly Meteoric Rise of Dalhousie Tigers Hockey.
Considering the Tigers had been the worst team in the country over the previous five seasons, missing the playoffs by 1 point this year was a huge success for Pete Belliveau and his revamped Dalhousie team.
Belliveau brought in a bevy of new players in his first recruiting class but lost his prize catch weeks before training camp when Maxime Tanguay decided to play AHL hockey instead of hitting the books.
The Tigers played with a great deal of grit and toughness but lacked any kind of scoring punch. Benjamin Breault came on board in January and provided an immediate boost to the offence, sparking a late January run that had the Tigers in control of their own destiny for a playoff spot.
But the team lost a pivotal game with seventh place Moncton at the Dalhousie Memorial Arena, followed by 4 losses in a row to finish the season allowing the Aigle Bleu to overtake them for the last spot.
With another solid recruiting class, the third year coach Belliveau should be able to finally get the Tigers back to the playoffs.
18. Huskies Back on Top of Women’s Volleyball
After a 2 year hiatus the SMU Huskies women’s volleyball team returned to the top of the AUS conference. Led by dynamic all Canadian Kerri Smit (http://live.haligonia.ca/halifax-ns/sportsblogs/173-sports-video/9071-kerri-smit-of-the-saint-marys-huskies.html), the Huskies caught fire at the perfect time. SMU would not drop a set in their last 3 matches of the season, including playoff victories over Acadia and St FX at the Tower.
Smit and Ali Beaver were named first team all stars.
17. The Decline and Rise of Dalhousie Women’s Basketball
After losing several key players and the retirement of coaching icon Carolyn Savoy, rookie Head Coach Anna Stammberger found herself with a freshman backcourt that struggled mightily vs. the pressure of opposing defences.
The Tigers finished the first term with a record of 1-6, looking horrible in the process.
That’s when April Scott, seemingly playing for the 5th time since 1997, and Alex Legge, fully rehabilitated from a devastating knee injury, returned to Tiger’s land and buoyed the team to a 9-4 second term record.
The Tigers quickly went from a team that looked like they wouldn’t make the playoffs to a team that was becoming a favourite to play in the AUS championship. Stammburger suddenly found herself with a nine player rotation that included crafty guards, athletic rookies, and the best trio of posts in the AUS.
Despite the momentum shift, the Tigers lost a pivotal game to SMU at the Dalplex in late February that gave them the 4th playoff seed and a meeting with the powerhouse CBU Capers in the AUS semi finals. The Tigers gave a valiant effort but came up short bringing to an end the outstanding careers of Scott and the Girdwood twins, Laurie and Leah.
16. The Year of the Guard in the AUS.
How good was the AUS men’s basketball conference this year at the guard spot? Look at this list.
Cristian Upshaw– St.FX. AUS MVP. 20 ppg.
Joey Haywood – SMU. 23 ppg. 3rd Leading Scorer in the CIS.
Simon Farine – Dalhousie. 22 ppg. 4th Leading Scorer in the CIS
Mark Mclaughlin – SMU. 17 ppg.
Jimmy Dorsey– CBU. 17.5 ppg. and AUS playoffs MVP.
The above list doesn’t even include Mike Anderson who averaged 18 ppg. for a horrible UNB team, Will Silver of X , maybe the best pure point guard in the conference and the guy who really set the table for the X-Men defensively, nor Casey Fox, the dynamic scoring guard of the Axemen and son of local basketball legend Mickey.
In the end it was the athleticism and scoring of the Capers and X-Men guard combos that prevailed, and Dorsey of the Capers stealing the show at playoffs in Cape Breton.
But what a treat it was to watch high scoring and athletic backcourts on nearly every team in the conference go to battle night in and night out.