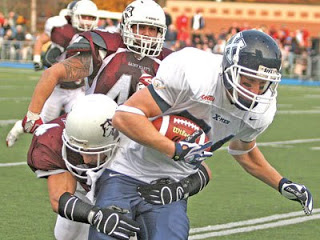 The Huskies/X-Men rivalry was the only highlight of a forgettable AUS Football Season.

Today we count down 15-11 of the top storylines of the 2009/2010 AUS season.
15. Jimmy Mayaleh: Hero to Goat in 60 Seconds
The UPEI Panthers Men’s soccer team, comprised almost entirely of athletes from the Island, upset the 2008 AUS champion Dalhousie Tigers at Wickwire Field on semi final Sunday at the AUS championships. Jerrod Murphy and Jimmy Mayaleh played brilliantly in leading the Panthers to the stunning win over the heavily favoured Tigers.

The AUS final was played Monday morning on a beautiful, sunny day in Halifax. The powerhouse Cape Breton Capers held a 1 goal lead well into the final minutes when Mayaleh found open space for the first time in the match and drilled a strike past the Caper’s keeper to tie the game at one.

Charlottetown’s Mayaleh was an instant hero for his hometown school, and to celebrate he ran around the field while removing his jersey. This earned him an automatic yellow card, seemingly an easy price to pay for the amount of joy the underdog Panthers felt as they drew even with the mighty Capers.

However, just seconds after Cape Breton kicked off, Mayaleh let loose with a vicious and unnecessary challenge at midfield that drew another yellow card, earning Mayaleh an ejection from the match.

Mayaleh walked off the pitch looking like a man desperate for a hole to crawl in. The same turf that, just 1 minute prior, he had been dancing around minus his shirt, celebrating the goal of the tournament.

Down to 10 men, the Panthers would go on to lose to the Capers. Keishon Bean scored the game winning goal just 20 seconds into the first overtime to give Cape Breton an AUS Championship.

As a result of the red card, Mayaleh was forced to miss the team’s opening match at nationals. The Panthers would go on to lose to Laval 3-1.

14. 0-20. The Hard Luck Season of the UPEI Panthers
Surely this wasn’t what Carly Clarke had in mind when she envisioned herself as a CIS head coach of women’s basketball.
Clarke, the former all Canadian at Bishops and exceptional assistant coach at Dalhousie, inherited a Panther’s program in complete disarray in the spring of 2009, without any opportunity to recruit.
The results were disastrous. The Panthers would not win a conference game all season. Their narrowest margin of defeat was 19 points to the 7th place UNB Varsity Reds at home in late January.
Their leading scorer was Shylanda Saunders with a paltry 8 ppg. The team was outscored 1522-860 over 20 conference games.
However, Clarke never stopped. She never stopped coaching, never stopped teaching. She worked the officials, yelled at her players, and stayed on her feet the entire game.
Her kids, although coming up woefully short night in and night out, never stopped competing. They became a team that you wished would get a win, even though you knew they wouldn’t.
It may take a couple of years, it may take 5; but Carly Clarke and the UPEI Panthers will rise up and be a force to be reckoned with in the hotly contested AUS women’s basketball conference.
13. Lack of Success of AUS teams at CIS Nationals.
How bad was the AUS at National tournaments this year?
Football: Calgary 37 SMU 14 in the Uteck Bowl at Huskies Stadium
Men’s Soccer: Trinity Western 2 Cape Breton 0 in Quarter Finals. Laval 3 UPEI 1 in Quarter Finals
Women’s Soccer: Queens 1 St FX 0 in Quarter Finals (OT)
Men’s Volleyball: Calgary 3 Dalhousie 2 in Quarter Finals
Women’s Volleyball: UBC 3 SMU 0 in Quarter Finals
Men’s Basketball: #7 Seed Calgary 82 #2 Seed CBU 74 in Quarter Finals
Women’s Basketball: Saskatchewan 70 CBU 54 in Quarter Finals
Women’s Hockey: SMU Finishes 4th at Nationals; Host X-Women Finish 6th
Men’s Hockey: SMU wins National Championship
Asides from the Huskies storybook national title, the AUS performed horribly at CIS nationals this season.
Memo to the AUS: Just getting there isn’t good enough.

12. Yawner of a Season in AUS Football
The 2009 AUS football season may have been the most forgettable in recent memory for the following reasons:

1) Although SMU won the conference and Steve Sumarah won CIS coach of the year, the Huskies were obviously not a national calibre team after getting blown out by Calgary at the Uteck Bowl in Huskies Stadium.
2) The Saint Francis Xavier X-Men were highly overrated. After a close win over a cocky Huskies squad and several wins over horrible teams like Acadia, Concordia, and Mount Allison, we started to believe the X-Men were pretty good. That’s when they got blown out by a mediocre Bishops team, destroyed by the Huskies in Halifax in a pivotal match up for the AUS regular season title, and needed a miracle comeback to beat Acadia in Antigonish in the AUS semi final. The X-Men season ended with a whimper in the Loney Bowl the next week at SMU, and we were all left to ponder the question; were the X-Men really a good football team?
3) Acadia and Mount Allison were a combined 2-14 on the season. When you only have 4 teams in your conference and 2 of them are a couple of the worst teams in the country, chances are good it’s going to make for a bad season of football. The only positive for both these teams was Wide Receiver Gary Ross of the Mounties. Despite his team not winning a single game, Ross garnered AUS MVP honours. I saw Ross up close on the sideline of Huskies stadium in October and he was as good as advertised. Quick, explosive, great hands and tough as nails.
4) Lack of big games on Eastlink. Because of the shortage of depth in the conference, Eastlink’s commitment to the QMJHL clashing with Saint Mary’s initiative to have home games on Friday nights, and the absence of an interlock headliner match up with a dominant Quebec team (i.e. SMU/X vs. Laval/Montreal), the local cable company seemed to show a lot of games featuring bad football teams while highly anticipated games went untelevised.
With that said, the Saturday afternoon game in late September between SMU and Sherbrooke was a doozy!

11. The Brown’s Take Wolfville
Was there a more heart-warming story in women’s basketball this year than sisters Alise and Keisha Brown playing side by side at Acadia.

Alise, the 5th year senior who transferred from SMU where she had one of the greatest careers in Huskie’s history, joined forces with Keisha, the dynamic sophomore guard, to try and lead the Axewomen to the upper tier of the AUS conference.
In the fall it seemed like they might succeed, as Acadia jumped out to a 3-2 record including a huge win over the Huskies at the War Memorial Gymnasium in Wolfville.
That’s when Keisha succumbed to a nagging injury and missed the next 11 conference games. The Axewomen would go 1-10 over the stretch and find themselves on the outside looking in of the AUS playoff race.
Keisha came back in early February to spark the Axewomen to a 3 game winning streak that would secure the last playoff spot and set up a quarter final match-up vs. Alise’s former team, the Huskies.
SMU would prevail 64-63 but the sisters Brown would go down firing, combining for 34 shots and 70 minutes in a losing effort that brought to an end the incredible career of Alise.
There is good news; Keisha still has 3 years left.