everyone’s food. I’ve become a little more bashful about it, though, since coming back home to Nova Scotia. As a result, I don’t have any photos of our food from Trattoria della Nonna, but I do have some of our breakfast that I’ll share. Now that I’ve actually started Food: Je t’Aimée, I have a fine excuse to get back on the photo-taking wagon and ask that my future dinner-mates humour me. Consider yourself warned!

﻿﻿﻿﻿﻿﻿﻿﻿﻿﻿﻿﻿﻿﻿﻿﻿﻿I came home last February, after almost two years living in South Korea, and one of my first orders of business was setting up one of these new-fandangled Groupon accounts I had been hearing so much about. Buying the deal for Trattoria della Nonna was my very first purchase back in March, so I was saving it for a special occassion.
After weeks of rainy, grey skies, and with that Groupon burning a hole in my pocket, I set off for a quick weekend escape to Lunenburg last Saturday with F.: my fellow foodie and partner in culinary crime, among other things.﻿﻿ ﻿﻿﻿﻿﻿﻿﻿﻿﻿﻿﻿﻿The upside to all this rain – yes, there is an upside! – is that the grass and trees are flourishing because of it, and adding some luscious green to the grey landscape. It also made Lunenburg – a charming, coastal town and UNESCO world heritage site – especially atmospheric.
﻿﻿﻿
﻿﻿﻿Upon arriving at The Mariner King (our lodgings for the night), we discovered that Trattoria della 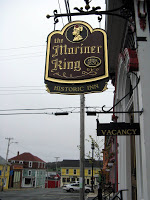 Nonna was right next door. Given that we had both already scoped out their menu online, and that the Chef, Terry Vasallo, hails from such highly-praised kitchens as Seven and The Five Fishermen in Halifax, I think we were both really looking forward to the evening’s indulgences. I also enjoyed the fact that our room was only a short stumble away, should we find ourselves in a food coma later in the evening. 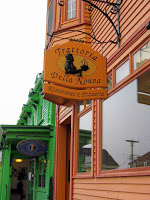 Trattoria della Nonna is just what a charming, ristorante should be: Intimate (not too big, not too small), cozy, and atmospheric. Perfectly set lighting cast everything in a yellowish hue and created a gorgeous ambience. I immediately felt pleasantly warm; something like the feeling after one glass of wine. There were three small floors that were all visable from the front entrance. We were brought down to the bottom floor, which felt cellar-like and reminded me of many places I had eaten at while living in Germany and travelling elsewhere in Europe.
With menus laid out in front of us, it was decision time. There was a book of restaurant reviews in our room at the Inn, and in it, the writer had recommended starting with the calamari here. I absolutely love calamari, but as a result, I’m often disappointed by it and therefore usually hesitate before ordering it. It’s either too greasy, not fresh, too chewy, or just not flavourful enough. Trattoria’s calamari, however, did not disappoint! Admittedly, it was probably some of the best I’ve ever had. It was lightly battered, crispy, and remarkably fresh. The seasoning was spicy and had some kick to it, which I really liked. The warm olives and pickled onions added some great flavour when combined with the calamari, as well.
﻿﻿﻿﻿﻿﻿
For mains, I ordered the Agnello (hazlenut and herb crusted lamb rack and lamb shoulder ragout, soft polenta with pecorino, brodo di agnello) and F. ordered the Pollo al Mattone (crispy skin cornish hen, cooked under a brick, crushed potato with fresh herbs and bacon, black sausage jus). I asked for my lamb to be cooked medium, but it showed up cooked straight through and more on the well-done side. I didn’t mind, though, because the lamb was extremely tender and packed with flavour. The ragout was the best part of this dish, hands down. From the bites I stole off of F.’s plate, the Cornish hen was moist and had a nice hints of cinnamon and cloves. He said it was good but he’d had better. I think we should have just switched plates, because from what I tasted, I liked his even better than mine. We washed all this down with a bottle of Evil (2007, Cabernet Sauvignon, South Eastern Australia) and topped it off with some Torta al Formaggio and Limone – both of which were to die for. The lemon tart was fresh, tangy, and palate-cleansing after such a rich meal, while the cheese cake was decadent and completely sinful. It was just enough to send us home completely stuffed and satisfied. Adding to the experience were the wait staff: Lovely, warm, personable, and attentive in the all the right measures.
﻿﻿
In the end, F. snuck off and paid the bill, claiming that it was an excuse to come back and use the Groupon another day. Maybe he liked his pollo more than he admitted? Hmmm. In any case, I’d happily revisit Trattoria and sample some of the other dishes on their menu. It was definitely worth a trip out of town.
﻿﻿ ﻿﻿﻿﻿﻿﻿﻿﻿﻿﻿﻿﻿﻿﻿﻿﻿﻿ ﻿
﻿﻿﻿﻿﻿﻿﻿﻿﻿﻿﻿﻿﻿﻿﻿As a quick ending note, I’d also like to offer my two cents on The Mariner King. Wonderful, helpful staff, gorgeous rooms, and one of the best breakfasts I’ve had in ages, which was included in the price of the room.
﻿

﻿The breakfast had both a continental spread and a hot menu to choose from. We indulged in everything:  the beautiful cheeses (the cranberry goat cheese was a favourite), cured meats, fruit, croissants, and champagne, as well as dishes off the hot menu. I had the lobster eggs benedict and F. had the apple and cinnamon brioche French toast. The lobster was slightly on the rubbery side, but was still tasty and had a lovely presentation, while the French toast was a huge hit for both of us. Considering we straggled down minutes before breakfast ended, I think we did pretty well for ourselves. I was even offered a mimosa top-up before they packed the cart away. ﻿﻿﻿﻿﻿﻿﻿﻿﻿﻿﻿﻿﻿﻿ ﻿﻿﻿﻿﻿

All in all, a hugely successful 24 hours of foodie bliss. In truth, it was more like 36, since the previous night I had gone to The Bicycle Thief in Halifax with Colleen (lifelong friend and once partner in teenage riff-raffery), to celebrate our payday. I’m going to wait to write about this one, though. My first meal there was wonderful, but I’ve heard mediocre reviews since, from some people whose taste buds I trust. Maybe I got lucky that night, or maybe they got unlucky. Either way, I’ll give it another go before I share my thoughts.