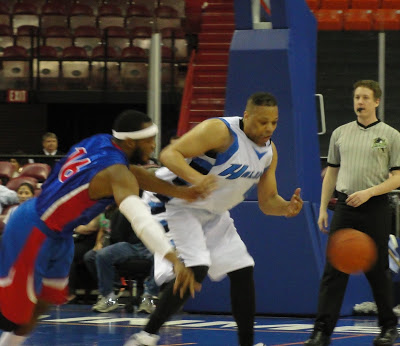 RAINMEN 109, KEBS 86
Rainmen Record: 13W-7L
The Rainmen came out with the 109-86 win over the Quebec Kebs but they also came out with a few injured bodies at the end of it.  The Quebec Kebs appeared out of sync at the Halifax Metro Centre as the shorthanded Rainmen squad had no problems with the 4-14 Kebs.  Gary Ervin played the full 48-minutes and posted his second triple double of the season.  Ervin led the Rainmen with 22 pts-12 reb-15assists in the Rainmen’s regular season finale.

The Rainmen were without Eric Gilchrese who had been dealing with a groin injury and Tony Bennett played just two minutes as he dealt with an Achilles injury.  Both Garry Gallimore and Jevohn Shepherd hobbled off the court in last night’s game as well.  Gallimore limped off the court after being called for a charge in the second quarter and did not return to the game.

The highlight of the night had to be the Jevohn Shepherd slam from the weakside where Shepherd threw it down on  Quebec’s Louis-Patrick Levros aka “Rat-tail” (as named by the Rainmen fans).

For the Kebs, Brandon Morris led the Kebs with 25 points while PBL Player of the Week from March, Samuel Audet-Sow, finished with 12 points.

Post Game Links:
The Chronicle Herald
“The Rainmen open a best-of-three semifinal playoff series at home on April 15 against either the Lawton-Fort Sill Cavalry or Rochester RazorSharks, depending upon the outcome of their battle with the Vermont Frost Heaves for third place in the Premier Basketball League.”

Metro Halifax
“In what was a little more than a tuneup for the Premier Basketball League playoffs, the Rainmen rested injured top scorer Tony Bennett and veteran double-double machine Eric Crookshank and hammered the Kebs 109-86 last night to wrap up the regular season before a crowd of 1,847 at the Metro Centre.”