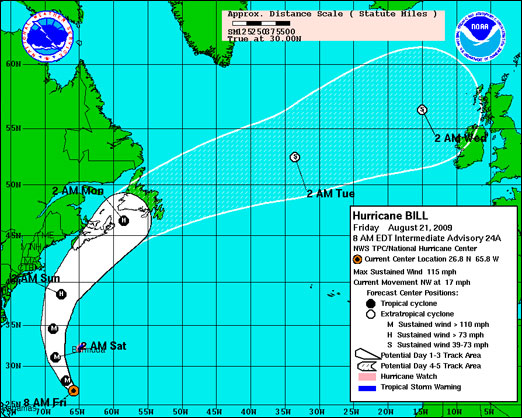 Environment Canada has issued a tropical storm warning, including rainfall and wind warnings.

“A tropical storm warning is in effect for Southwestern Nova Scotia. The centre of hurricane Bill is forecast to pass close to Nova Scotia on Sunday”.

The Canadian Hurricane Centre  informed the public on Friday that “the swell from hurricane Bill will arrive along the Atlantic coast of Nova Scotia on Saturday. Swell heights near 2 metres will generate rough surf and hazardous rip currents along some beaches. Breaking wave heights on the shoreline may exceed 3 metres”.

Hardcore surfers headed out very early this morning to take advantage of the swells before things get too serious. Once the storm hits, no one wants to be near the waves!

Experts are advising the public to be prepared in case we are faced with an emergency situation. The Nova Scotia Emergency Management Office (EMO) has a list of basic supplies in case of an emergency, as well as a list of recommended additional items. Visit www.emo.gov.ns.ca for full list of items.