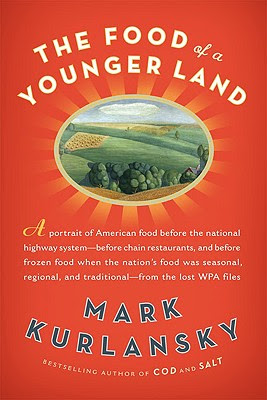 I came across this book a few weeks ago when I was writing another post for the Reader about food related books. Anything with Mark Kurlansky‘s name catches my eye. The author of Cod and Salt is a big name in the microhistory genre – an author that is credited with a lot in terms of the rising popularity of the genre.

The title struck my attention too – but maybe not for the most flattering reason, and it wasn’t the title but rather the subtitle. I couldn’t image how a book managed to get published with such a cumbersome subtitle. The full title is:

The Food of a Younger Land: A Portrait of American Food – before the national highway system, before chain restaurants, and before frozen food, when the nation’s food was seasonal, regional and traditional – from the lost WPA files

Despite its unwieldy length, the title is actually perfectly descriptive of what’s included, although it’s helpful if you know that the WPA was the Works Progress Administration, set up in the USA as a part of the New Deal in 1935. It was tasked with providing work to millions of unemployed Americans following the Great Depression. Many of the WPA jobs were on infrastructure projects or assisting in the distribution of food and clothing to needy families but a major wing involved keeping America’s artists employed.

The Federal Writer’s Project existed in 50 states and employed such now famous writers as John Cheever, Studs Terkel, Zora Neale Hurston, Eudora Welty and Richard Wright. An early project involved the creation of travel guides to the then 48 states. However, it’s because of a later – and unfinished project – that we get Kurlansky’s book. America Eats was to have been a Writer’s Project collection on the food habits of Americans. Writings were compiled and collected, but the project was never finished. Kurlansky’s book brings together a large number of the writings that are in the project archives and makes them available to readers.

The result is – as the subtitle promises – a portrait of American food at that time before huge highways and mass produced food. From “Pop Corn Days in Nebraska” to an introduction to “A Los Angeles Sandwich called a Taco” to competing recipes for clam chowders and Mint Juleps, the book highlights delicacies, delights – and writers – long forgotten.

With Kurlansky at the helm, introducing the pieces and setting the context (including a much more detailed and interesting introduction to the Federal Writers Project than the one I give above), the book is a delightful compendium of writings from a time that is fast disappearing from the collective consciousness.
(oh and if you’re interested in a snapshot of the works from the Writer’s Project guidebook project, the library also holds a title called Remembering America: a sampler of the WPA American guide series).

Staff Picks: The Food of a Younger Land edited by Mark Kurlansky
https://haligonia.ca/staff-picks-the-food-of-a-younger-land-edited-by-mark-kurlansky-4950/