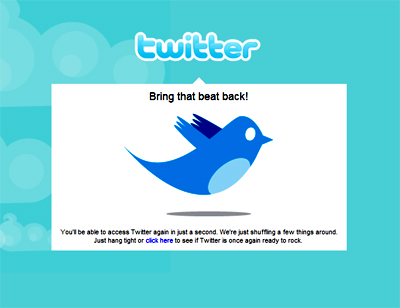 So you’ve visited my blog for the first time. Will you come back? Perhaps. How many times? Probably once or twice. I’m not monetizing my blog, so I have no desire to really keep you coming back. I am passionate on what I do for a living and write, so I’ll keep at it. If you don’t like the content, you’ll leave, and I’m fine with that.

This is not the case for a business. The purpose of a business is to generate profit, otherwise it is a non-profit organization and should therefore not pay taxes. In reading Nielson Wire’s recent look at Twitter retention rates I’m catching a wiff of jealousy from Industrial Media – since Twitter is so active as a medium, it takes away viewership from broadcast television, which means lost ad revenue and perhaps less revenue for Nielson.
One clear fact I’ve come to discover with Twitter: Until you break the 100 followers mark, it doesn’t make a lot of sense…but that’s another blog post. Here, we’re talking retention.
But is that relevant entirely? Television is a “passive” activity, there’s little to not “activity”, generally you don’t interact with television. Which is a key point. We watch television because we want to “consume”, but in a passive way – we simply want to be entertained for a while. Twitter is an “active” engagement medium, it’s 2-way.
You can just read, but to get to get to a useful amount of information, you have to engage in the conversation. If you’re not engaging, you miss things. In some cases, you might only engage with 10 people; and that’s fine, since that’s the only 10 people you care to engage with. Everyone else is moot.
I don’t think it’s a comparable metric. The two mediums are very different, therefore, retention is not really the metric is it? Rather, I think the metric should be “engagement” and you don’t engage on TV, you watch. Twitter is “active” and television is “passive”. Two different objectives. In my view, Nielson is approaching the issue in entirely the wrong way and comparing Twitter to Television is like comparing well, oh dear, apples to windows.
What do you thunk?