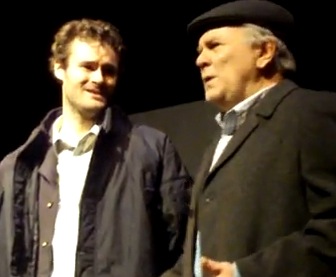 Haligonia reporters Liam Paul and Emma Ross talk with director Charlie Rhindress about Mesa, now playing at Neptune Theatre.  Check out a couple of excerpts from the show as well.  Tickets are available at Neptune Theatre’s box office or online at neptunetheatre.com.

Bud and his grandson-in-law Paul are going on a road trip from Calgary to Bud’s retirement trailer in Mesa, Arizona. Paul is hoping the adventure of the trip will lift him out of his writer’s block. Bud is hell-bent on visiting his favourite Motel 6 haunts along the way, and isn’t willing to veer off the beaten path. Written by Canadian playwright Doug Curtis, Mesa follows these unlikely travel companions as their often comic disagreements make way for a heartfelt friendship.

Video: Two men, a highway, and a journey
https://haligonia.ca/two-men-a-highway-and-a-journey-12215/