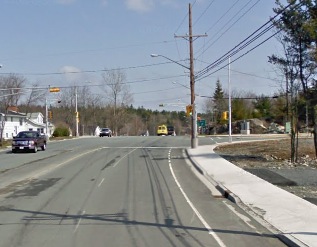 The passenger of a vehicle involved in a collision in Halifax on Monday
has succumbed to his injuries.

The incident occurred on 4:50 p.m. on Hammonds Plains Road near
Innovation Drive. Investigators believe that a car was exiting a
driveway when it was struck by a pick-up truck towing a trailer
traveling outbound on Hammonds Plains Road. The driver of the truck was
not injured, however, both occupants of the car were taken to hospital.
The male passenger of the car passed away on Tuesday afternoon. The
identity of the victim is not being released at the request of the
family.

The incident is being investigated by the Accident Investigation Unit
and the investigation is on-going. Investigators would like to speak
with anyone who was in the area at the time of the incident and ask that
they contact police at 490-5016.

Two adults, believed to be in their eighties, have been taken to the QE11 with serious injuries. Hammonds Plains Road was reduced to one lane in each direction as officers from the Accident Investigation unit completed their measurements.

It appears a vehicle was exiting a driveway when it was struck by a pick-up truck towing a trailer travelling outbound on the Hammonds Plains Rd. Both adults taken to the hospital were occupants of the car. The driver of the truck was not injured.

The investigation is ongoing at this time.

A fifty-five year old man will appear in court today charged with break and enter, robbery, and weapons offences after an incident on South Park Street shortly before 2am today.

The accused entered a basement apartment in the 1100 block of South Park Street after breaking the lock. He grabbed a large knife from the counter and began swinging it at the three male residents who were inside the apartment. They ran to the bathroom, locked the door, and called 911.

The man left the apartment before police arrived, taking several items of food with him. He was arrested at Grafton Street and Blowers Street at 2:30am without incident and the stolen property was recovered. The victims were not physically injured as a result of this incident.