It’s been a long, brutal winter and most of my favorite TV shows have ended or will soon end. In particular, I’m still mourning the ending of Parks and Recreation. Even though I thought the final season was fantastic, and the show had a great run and went out on a high note, I felt the loss in my TV schedule.

I don’t watch very many sitcoms anymore. In the last couple years I adopted a bit of a policy to stop wasting time on shows that I only feel lukewarm about, which meant cutting Modern Family and The Big Bang Theory, among others, from my DVR’s list of series recordings. I’m down to Brooklyn Nine Nine and The Mindy Project, which make me laugh out loud every week, and New Girl, which doesn’t.

Enter Unbreakable Kimmy Schmidt on Netflix. The show was created by Tina Fey and Robert Carlock, originally for NBC, but to all our benefit, NBC dumped it for being too weird or dark or whatever, and it ended up on Netflix. That meant we all got to binge-watch the show. Have I mentioned that it’s been a long, brutal winter yet? This was EXACTLY what I needed. 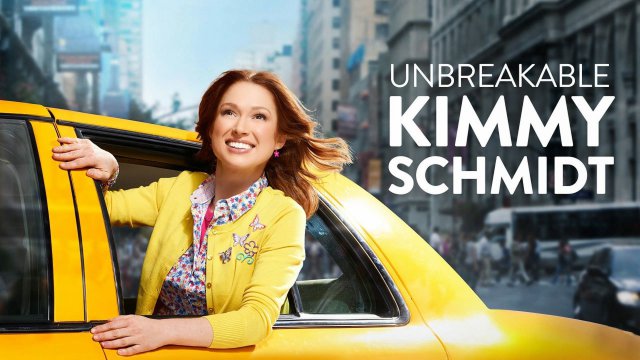 Ellie Kemper, of The Office, stars in the show. It’s about a woman who was kidnapped at age fifteen, and kept in an underground bunker with three other women by a man who claimed to be saving them from the apocalypse. It’s a dark premise for a surprisingly sunny, warm – but weird – show.

The titular Kimmy Schmidt decides not to return to her small town life, but to start anew in New York City. She approaches everything with the awe and wonder of a rural teenager in the big city, and someone who’s missed the last fifteen years of technological advances and pop culture.

Kimmy gets a job as a nanny to the children of a rich New York socialite, played by Jane Krakowski. She finds a roommate in a struggling wannabe Broadway star, played by Tituss Burgess. The cast is killer, and the writing is sharp and funny.

I never consistently watched 30 Rock, despite thinking the show was hilarious and had a great cast. The problem, for me, was Tracy Morgan. I found his character (which is, basically, him) annoying and couldn’t get past his presence on the show. I love that this show has the same sensibility as 30 Rock, but this time with a cast I can 100% enjoy.

I was completely onboard with the show after only watching a few episodes, and could not get the incredibly catchy theme song out of my head. My husband and I tried to space out watching the series a little, but the episodes are short and there’s only thirteen of them. There are some fantastic guest stars to look forward to. I’m really looking forward to seeing a second season of this show, and witnessing what Fey and Carlock do with the freedom of knowing the show won’t be on network TV.