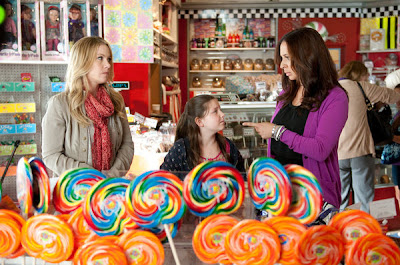 Up All Night is a charming show, mostly thanks to the chemistry between Christina Applegate and Will Arnett as Reagan and Chris. In last night’s episode “Week Off”, we got to see a little more of that dynamic at play since Reagan had the week off from work. (A pipe burst or something at the Ava studio, so everyone got a free vacation.)

With nothing to do and a Type A personality, Reagan started making things around the house “better” – the junk drawer, the closet, Amy’s laundry. But it had been the way Chris wanted it, and he’s the one that’s in the house every day. I liked how the disagreement wasn’t an actual fight between the two, it just highlighted the differences in their personalities and also addressed Chris’s changing identity now that he’s a stay-at-home dad instead of a lawyer.

Meanwhile, Reagan helped Ava bond with her new boyfriend’s daughter McKenna. I’m still not sure I buy Ava dating an everyman, and it’s certainly a device to give her an excuse to be in Reagan and Chris’s hood more often, but the writers and Maya Rudolph really sell it as she feels super attracted her Kevin every time he utters some kind of manly phrase like “load bearing wall” or touches her with his rough, calloused hands.

Up All Night is a simple show, but it delivers a lot of jokes. I found myself laughing out loud a bunch of times this week. Here’s a few things I liked:

Up All Night: Cabin Fever
https://haligonia.ca/up-all-night-cabin-fever-49502/