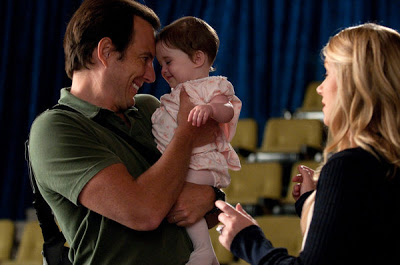 I watched the second episode of Up All Night last night, and I thought it brought the same charm and sweetness as the series premiere.

While at some point the show will need to get away from “We have a baby and can’t be fun anymore” storylines, there’s still enough material there for the time being. This week, Chris and Reagan struggled to look cool when some uber-cool new neighbors moved in. When the neighbors threw a loud, late, weeknight housewarming party, Reagan and Chris called the cops to quiet them down and get the baby to sleep, but then attended the party so the neighbors wouldn’t know they were the buzzkills who’d reported them.

It turned out that the couple themselves were newly pregnant, and that was the only thing I found hard to believe – would expectant parents really throw a party at 10:00pm on a weeknight? I guess, maybe. The highlight of this storyline was not the new parents stuff so much as Chris and Reagan’s panicked, desperate attempts at trying to look cool. Baby or not, their coolness peaked a few years ago – now they like Train un-ironically and Radiohead is no longer the hippest band around. (Was it ever? I have no idea. I was born rather uncool.)

The B storyline was funny as well, and a good use of Maya Rudolph. She was desperate for Reagan’s baby Amy to like her, but Amy cried whenever Ava picked her up. Because the baby is uncomfortable around people of color, obvs. Except Amy loved baby whisperer Calvin, played by guest star Nick Cannon. Of course, once Ava did bond with Amy, she was all kinds of done with her.

All in all, it was a decent second episode. Here’s what else I liked about it:

Up All Night: Hard Party
https://haligonia.ca/up-all-night-hard-party-44000/