It’s easy to forget what a great show Modern Family is when it goes on an Emmys sweep, beating out equally (or possibly even more) loved sitcoms. But then it debuts a third season with two stellar episodes, you’re reminded of the insane chemistry these families have and the way you can totally relate to so many characters, and you go “Oh yeah. That’s why it wins everything.” 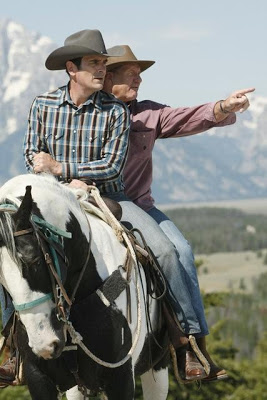 In the first episode, the family (plus Dylan) headed to a dude ranch in Wyoming for a family (plus Dylan) vacation. First, let’s deal with the elephant in the room – there’s a new Lily, she’s like, two years older than the old Lily, they didn’t explain it away with a time jump, and I don’t like her. I’m sorry, I know it’s wrong to dislike a toddler, but I found her rude and lacking in comedic timing (OK, that bit was mostly a joke) and I miss the old, stonefaced, deadpan Lily.

There was a lot going on in this episode and everyone seemed to have a storyline, yet they all felt equally serviced. I’m not sure I can choose a favorite. Mitch dealt with insecurities about his own masculinity as he and Cam begin the adoption process for a son. He ended up bonding with Luke, who was looking for the best possible way to set off a firework. Alex got her first (and second, third, I stopped counting) kiss from a brash New York kid. Phil attempted to be as manly as possible to finally impress Jay, who was too busy watching the ranch’s cowboy hit on Gloria to notice. And Claire struggled to accept Dylan as Haley’s boyfriend (and there was a hilarious misunderstanding there) right before he proposed to their teenage daughter.

There were so many strong points to the episode, in both comedic moments and dramatic developments. We saw that Haley’s grown up a bit – when we met that character she would have accepted Dylan’s proposal, but instead she turned him down and was just upset that Claire didn’t give her a chance to make the adult decision. And I really cared about both Phil and Mitch proving their manliness. But the episode was so chock full with moments that made me laugh, that’s what made it so great. I’ve listed a few things below.

In the second episode, the showrunners tried to prove to us why they hired a new Lily (or Lilies, since it’s always twins) she can talk and have storylines and stuff. Despite my resistance to this new baby, the storyline was funny – Lily was not reacting well to the idea of a little brother, and it could either be attributed to the way Cam coddles her or an inherited hatred of sharing from Mitch. I loved the montages we got here – of all the ways Cam “wears Lily like a fanny pack”, and then of all the ways Mitch refuses to share. (Oh Mitch, I totally get you.)

In fact, I might share the worst attributes of both Mitch and Claire, because I totally also would have gotten the security camera footage if I were in Claire’s shoes. She insisted that Phil had pushed her into a tower of cans at the supermarket (he had, because he was too busy staring at a pretty girl) but no one in the family would believe her, instead jesting about how she’s always right. If my family ever gangs up  on me like that, I’ll run away to Bali. The best part was that when Claire showed the footage for vindication, everyone was too horrified that she’d gone to such lengths to give her props for having been right. (Oh Claire, I hate that sometimes I totally get you.) 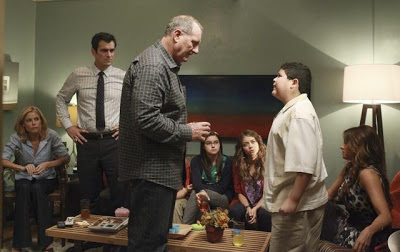 The smaller storylines weren’t quite as good, but still pretty funny. Haley and Alex convinced Luke to move into the attic, which Claire knew he’d hate (she was right, but didn’t need to admit it – so she is a good mom) and Manny got busted for stealing a locket from a girl at school. That storyline was pretty hilarious – I loved how Jay interrogated Manny about it in the garage and then, knowing Gloria hadn’t actually made him ‘fess up to the principal, made a toast to Manny’s integrity so he’d be guilted into coming clean.

I don’t think the second episode was quite as outstanding as the first, but it still delivered some good laughs. Here are some of my favorites:

So what did you guys think of the first two episodes? Favorite moments?