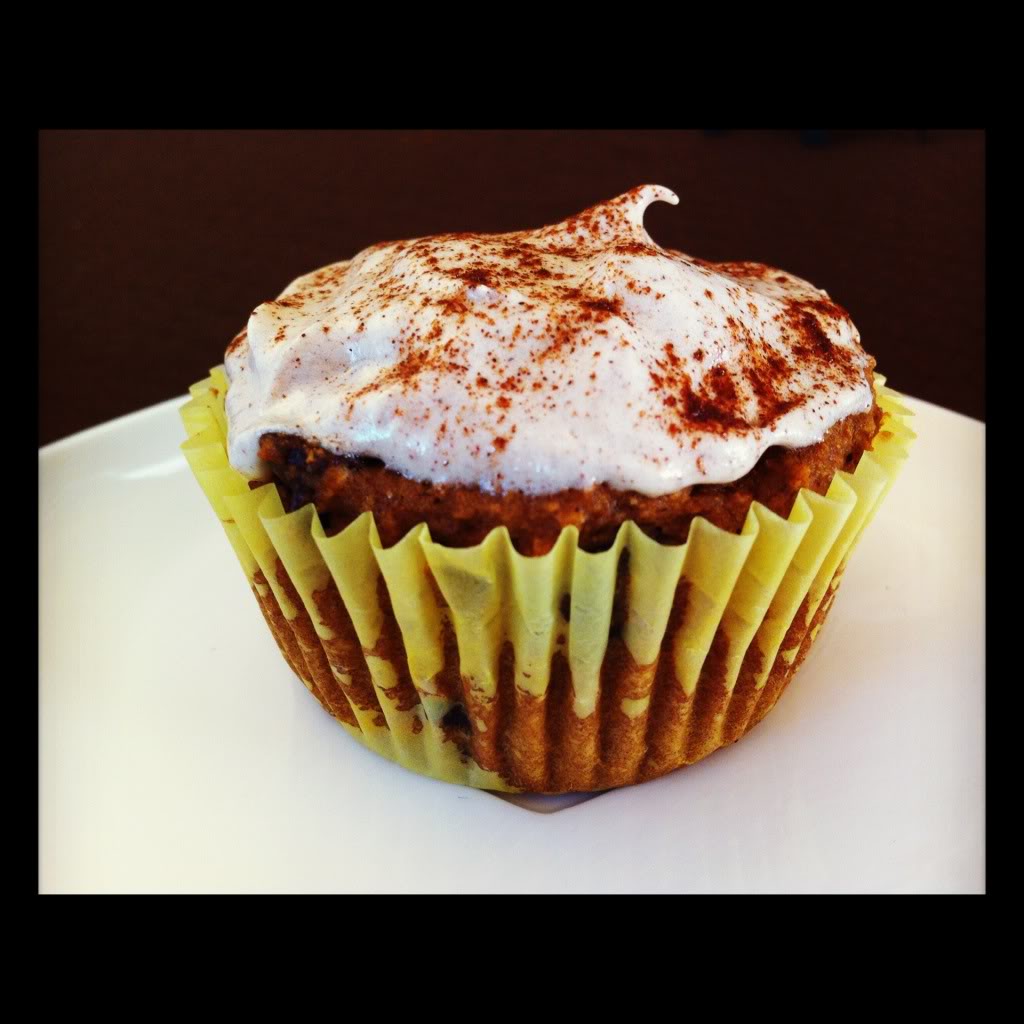 Did you know I made these cupcakes before and I completely overlooked the fact that they were VEGAN? I made these cupcakesinstead a birthday cake a couple of years ago, and I didn’t even think twice about the fact that there were no eggs or milk called for in the recipe. That was until I was lying in bed awake thinking (seems to be a pass time of mine lately), and it suddenly dawned on me that a certain someone said they had eggs for dinner, and I immediately started to have a mini panic attack becausethere were only two eggs left in the carton meaning there were no eggs left which I quickly meant no cupcakes! Boo hoo sad! I’d already gone to store a dozen times to pick up what I thought I needed for this silly recipe, but I havebeen so scatter–brained lately that I kept forgettingto buy the items I actually needed. So while I lay awake in bed fretting over eggs I decided it was silly to keep myself up over a stupid cupcake recipe and I resolved to go back to the grocery store AGAIN in the morning. So I get up and before I went out to the grocery store I decided it would be a good idea to review the recipe AGAIN and I realized hey I don’t even need eggs! Boo ya!! I was pumped! Until there was another problem. I was all set to start baking and I was gathering my items from the refrigerator and cupboard when I realized someone not naming names, but SOMEONE put an empty container of baking powder BACK in the cupboard! I mean who does that? Anyway so for last and final time I walked my lazy self over the grocery store and I bought some baking powder (the biggest one they sell) and I now have for you Vegan Spiced Pumpkin Cupcakes with Cinnamon Rum Icing! phewf! Hope you like them! Ingredients:  Cupcakes: 1 cup pure canned pumpkin
1/3 cup oil
1 cup granulated sugar (used brown sugar)
1/4 cup soymilk (or almond milk)
1 teaspoon vanilla extract (doubled this)
1 1/4 cups all-purpose flour (used whole wheat)
1/2 teaspoon baking powder
1/2 teaspoon baking soda
3/4 teaspoon ground cinnamon
1/8 teaspoon each ground cloves, nutmeg, and ginger
1/4 teaspoon salt
1/2 cup mini dark chocolate chips (w/ no milk) 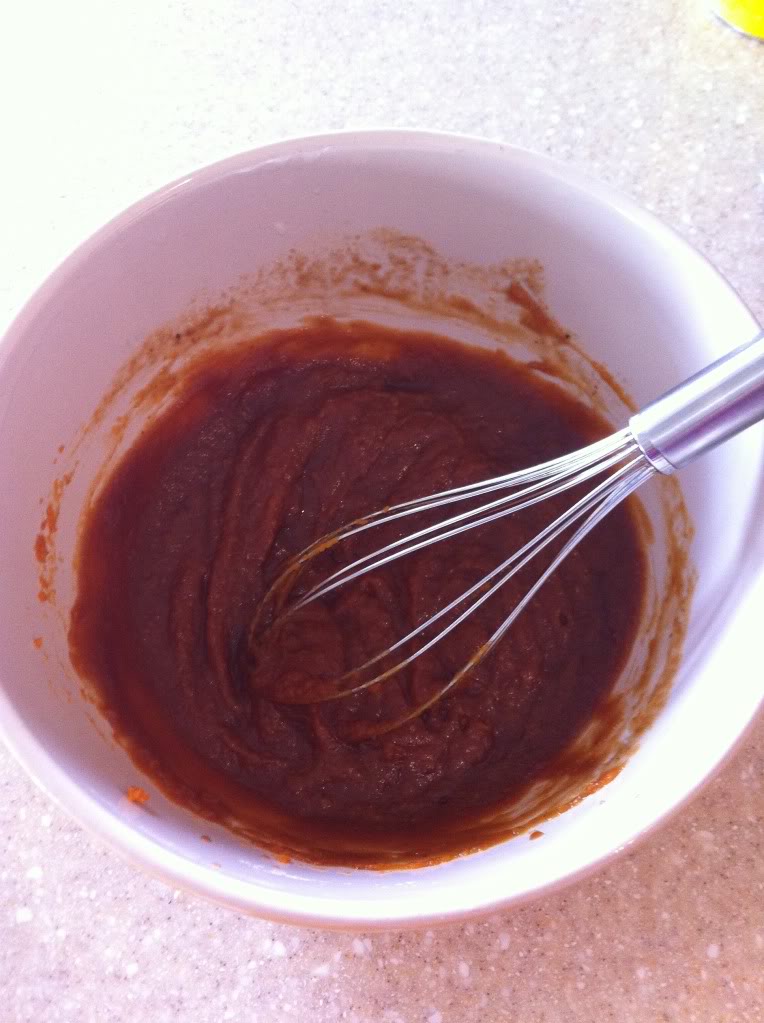 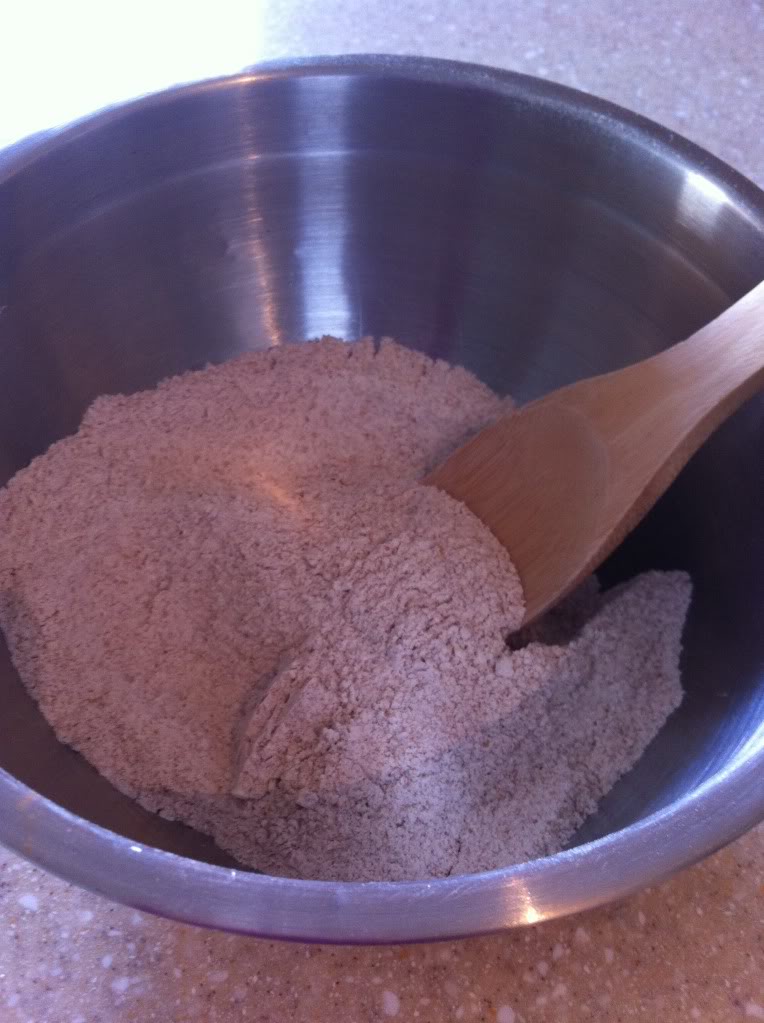 Gently whisk by hand until just combined, don’t use an electric mixer or overmix the batter because it may become too gummy. 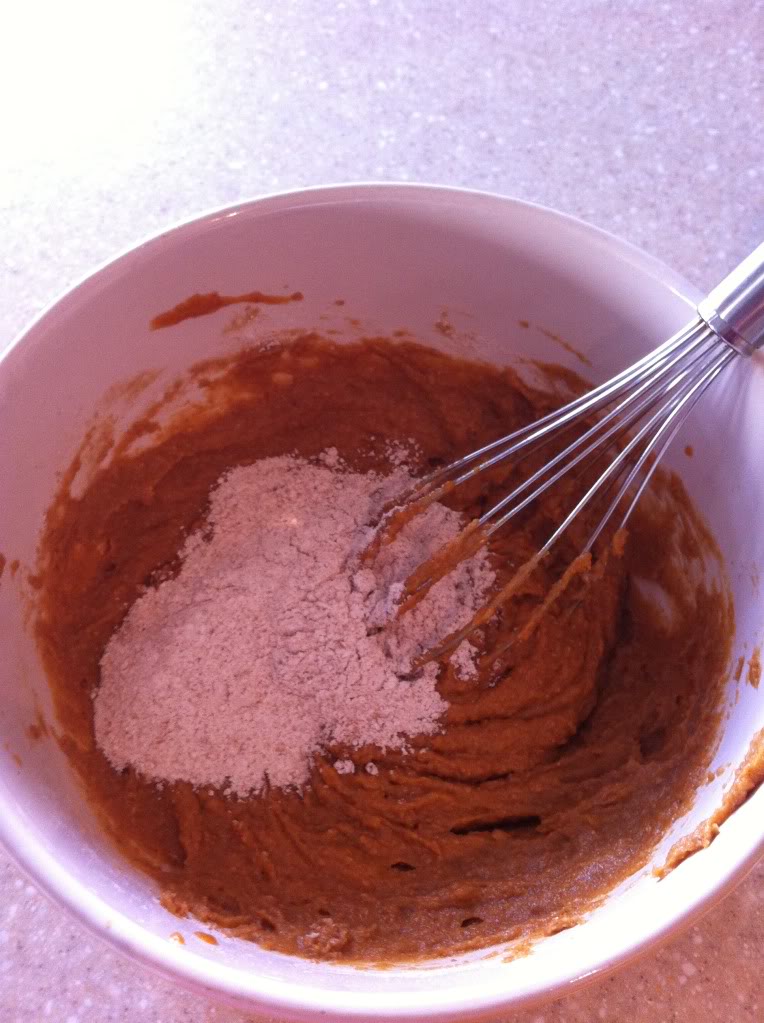 Once combined, gently fold in the dark chocolate chips. 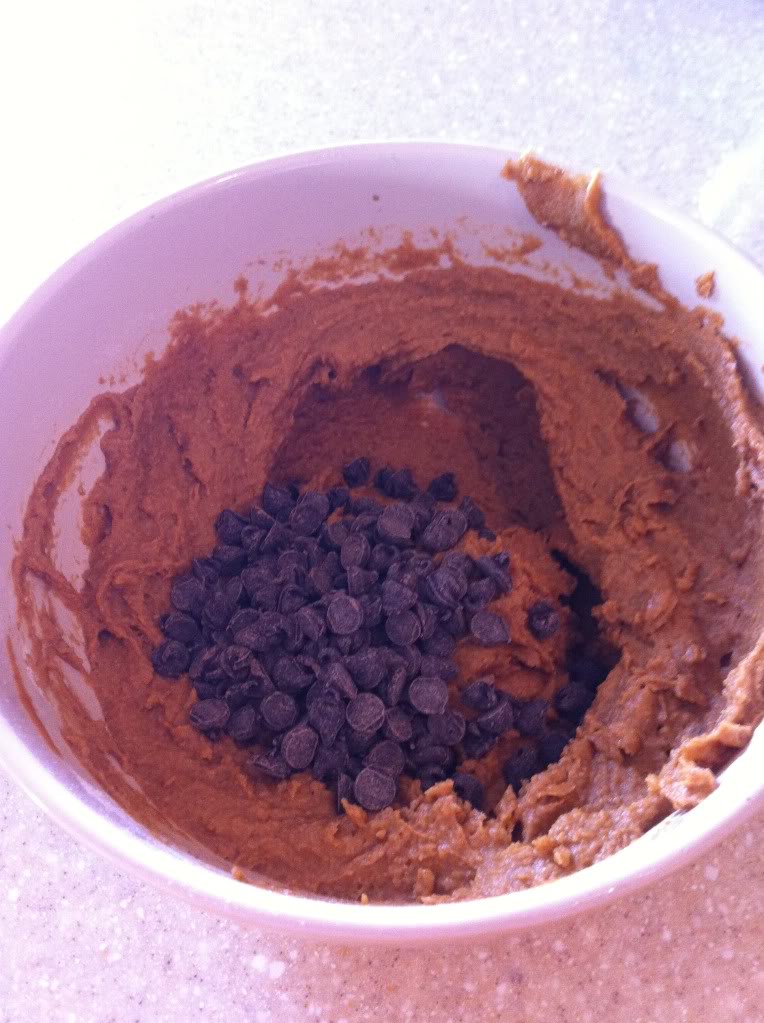 Fill liners with 1/4 cup batter (cups should be approximately 2/3 full).

Bake for 22 to 24 minutes, or until toothpick inserted into the center comes out clean. 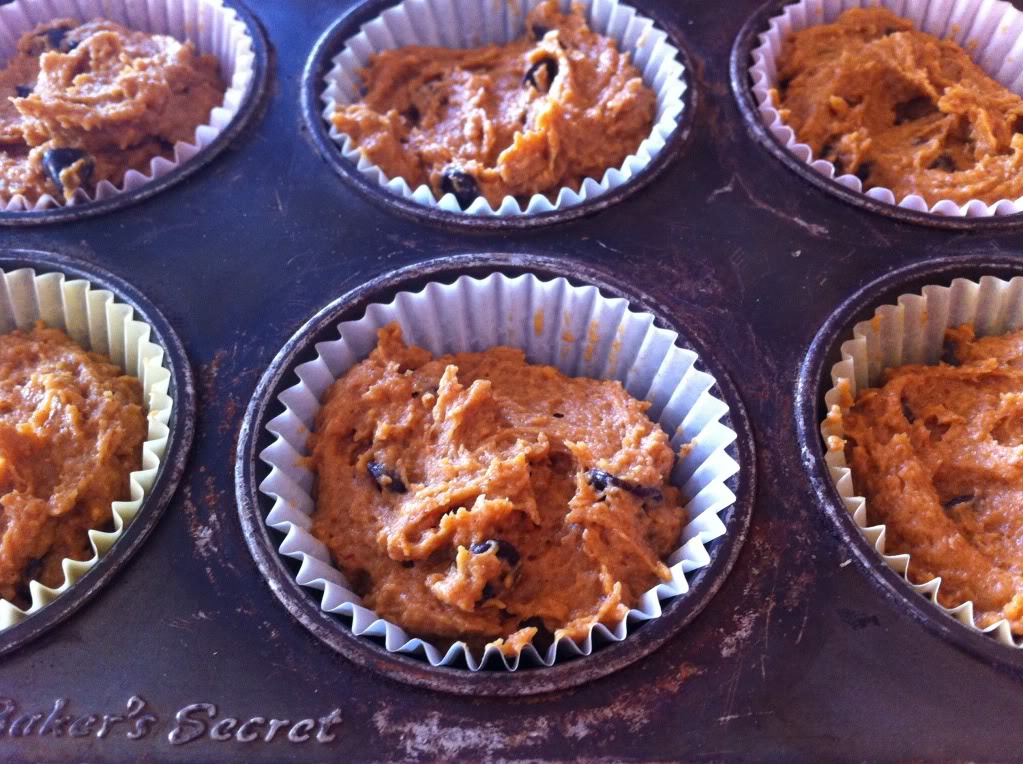 Transfer cupcakes to a wire rack and let cool completely before frosting.

Cream vegan margarine. Add 1/2 cup confectioners sugar and mix until smooth. Add rum and cinnamon, and slowly mix (careful not to splatter). Continue adding sugar, 1/2 cup at a time, mixing well between additions. Continue to beat until light and fluffy. If frosting is too thick, add a bit of soy milk to thin it out. If too thin, add more sugar and continue to beat until it is the right consistency. Spoon into a piping bag or just slather it right onto the cupcakes. 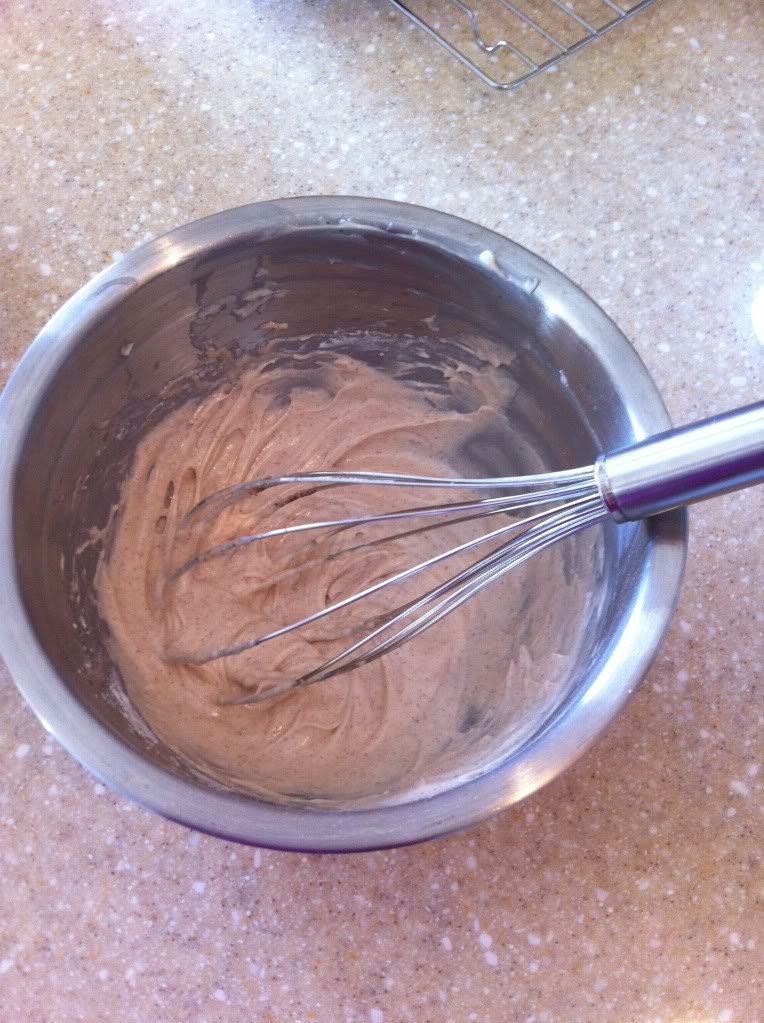 Dust with cinnamon and enjoy! 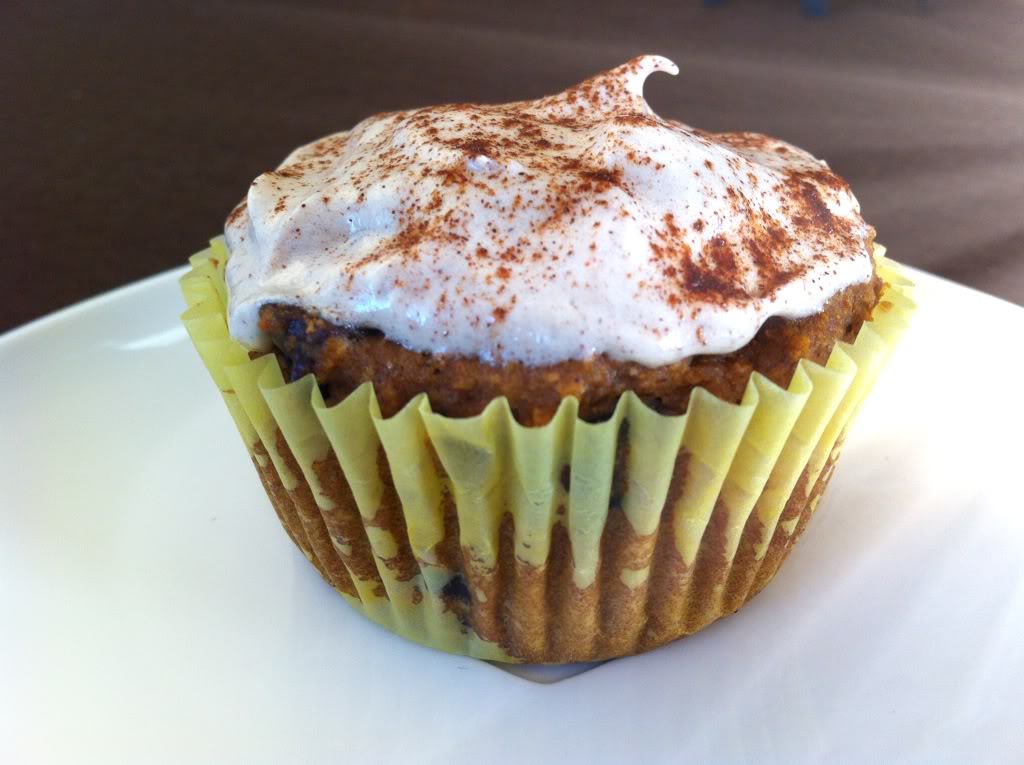 See eating vegan doesn’t mean you have to eat grass, and it’s super easy! Try incorperating more vegan recipes into your diet, and you’ll be doing your self and the environment a favor!