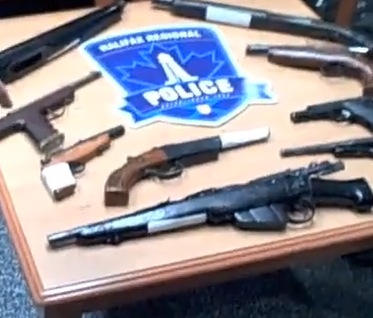 HALIFAX- Pistols, shotguns, rifles, sawed-off’s, home-made guns and muskets were among some of the hundreds of guns on display in the basement of the Halifax Regional Police Gottingen Street station this morning.

The idea behind the program was that HRM residents could bring in operational firearms and in return get a $300 gift certificate to Henry’s photographic.

Residents were encouraged to bring in illegal firearms as well, including restricted weapons and modified guns.

Supt. Don Spicer HRM’s Public Safety Officer explains how many illegal guns get into the hands of criminals.

“Most of the guns that are used in crimes have been stolen from legitimate gun owners through break and enters usually into their homes so the more guns we get off the street the less guns that are available for the criminals.”

Prior amnesty programs in 2006 brought in about fifty guns in the span of two months. In one month the Pistols for Pixels program netted just shy of 1,100 firearms and over 10,000 rounds of ammunition.

Almost all of the guns will be sent away to be destroyed however the HRP are talking with local museums to determine what guns with particular historical significance could go on display.