Do you guys know how long I’ve wanted to have a bowl of oats in a jar???  So many times I’ve finished a jar of nut butter and completely forgot to take advantage of the goodness that is left behind! Kath is definitely an oatmeal pioneer and I’ve had this in the back of my mind for at least a year! lol

By the way, THE BEST nut butter combo by far has to be almond-cashew butter.  I just love it! 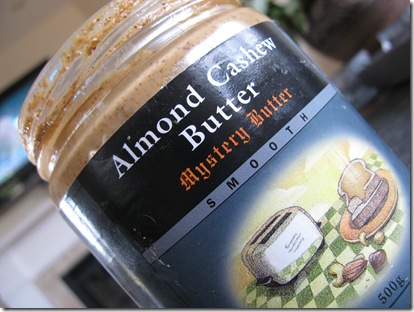 The mix was indeed pumpkin oats (I still can’t believe that I not only like pumpkin (finally!), but I LOVE pumpkin oats! 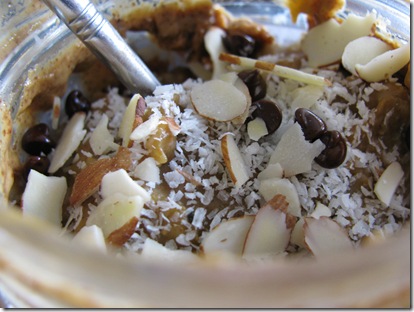 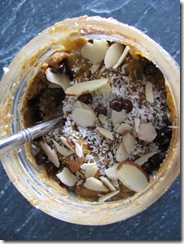 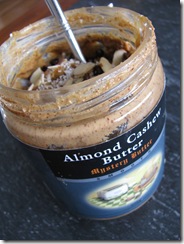 Okay so I’ve been wanting to share that with yas for like EVER! (I realize that’s pretty sad! lol)

So this week is pretty similar to last week in the POINTS department.  I used up most of my Flex early on in the week which wasn’t my original plan because I wanted to save them for Friday night because tomorrow night the Halibloggers are getting together to GTG to get hyped up for our Santa Shuffle race Saturday morning and we’re doing a baking exchange and a pot luck!  But since I did my baking early on in the week, a few “taste testing” episodes later and it doesn’t take long to use up your Flex on a few squares!  So the rest of the week was depending on Activity POINTS.

I gave the treadmill hell on Monday and felt great!  I wasn’t able to exercise on Tues/Wed because I had some more treatments to my shoulder with the specialist which involved many needles!  Needless to say, it was SORE.  I felt good enough to allow my arms to swing up a storm tonight though and I killed it again on the treadmill!  (Then I drunk tweeted off the endorphins telling you all that I love you :-D  Seriously if ya’ll aren’t on Twitter, you’re missing out on half the fun!)

I still don’t know where this all came from, this loving the treadmill business?  Don’t question it, or look it directly in the eye, just roll with it, I says! 😉

Soooooo speaking of the Santa Shuffle!  How sweet and thoughtful was it that Laura (who is one of my all time running heros sent us a little “surprise” to wear on the run?!! 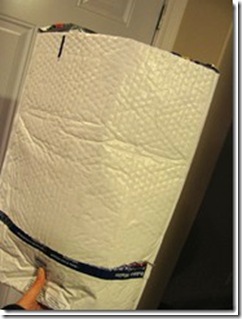 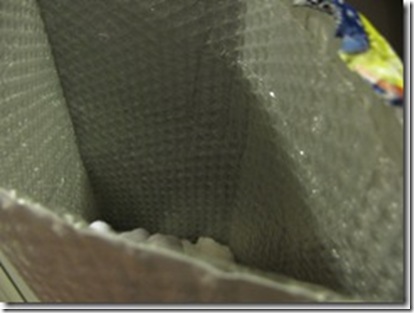 Keeping it secret ‘til tomorrow night! 😛

P.S. I have some reaaallly exciting news in the running department to share with you soooon!  I’m just starting to come out of the closet about it.  Again, if you followed me on Twitter, ya might already know! 😉

Oats in a Jar & Secrets in the Mail
https://haligonia.ca/oats-in-a-jar-a-secrets-in-the-mail-9246/