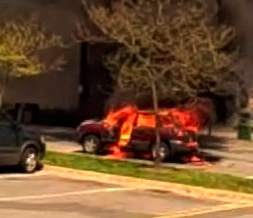 Sunday was a hot one, but was even hotter in a Bedford area parking lot after firefighters were called to an SUV that caught fire near Moirs Mill across the street from Sobeys.  Bystanders suggested that the cargo in the back seat of the vehicle ignited at about 2:30pm, causing the out of control fire to burn out the entire vehicle.  Thanks to haligonia viewer Jerry Lynds for the video.