I am ashamed that I have not read what may be the world’s most famous diary, Anne Frank : the diary of a young girl. It is one of those books that always gets delayed by what is “new and shiny” out there. For those who haven’t heard of Anne Frank (though I can’t imagine there are many) she was a young Dutch girl who kept a diary while hiding from the Nazis occupation of the Netherlands. The Frank family was apprehended by the Nazis in 1944. Anne later died of Typhus while being held in a concentration camp. Even though I have seen the movie a number of times, I do hope to read this book.

Another tale is that of a 13 year old Jewish girl in Hana’s Suitcase by Karen Levine. Hana Brady’s story came to the public’s notice when Fumiko Ishioka, the director of the Tokyo Holocaust Education Resource Center, exhibited Hana’s suitcase as a relic of the concentration camp. She wanted to show Japanese children what happened during the Holocaust, especially to children. In viewing this small artifact the children got insight into one of the one and half million children like Hana. In researching the suitcase and its owner Ishioka discovered that Hana’s brother survived the war and was now living in Toronto. This eventually lead to a CBC documentary and the award winning book by Karen Levine. HPL also has the documentary film Inside Hana’s Suitcase“. 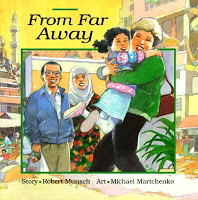 From Far Away by Robert Munsch is the first picture books I ever saw dealing with the effects of war on a child. I first read it many years ago(1995) and it still impacts on my emotions. Even though it is a Robert Munsch book the little girl whose story it is based on, Saoussan Askar, is listed as co-author and shares the royalties. It is the tale of her immigrating to Canada from Lebanon; not knowing the language, customs and holidays. Most of the book takes place at Hallowe’en. Can you imagine coming from a war zone to see bloody creatures roaming your street and school? It would be frightening to a young children especially one who has lived in a violent land for most of their lives. When I worked at an elementary school I often read this book to the grades Primary to 4 as part of the Remembrance Day ceremonies. It helped them “step into someone else shoes”.

Off to War: voices of soldiers’ children by Deborah Ellis. Royalties from this book are donated to the Children in Crisis fund of IBBY (the International Board on Books for Young People). War may effect people in many different ways. We often think of the impact of war on people in the area. This book gives the reader a different view, from the aspect of the children left behind when their parents are sent to war. The stories in this books are tragic and touching. They are the unheard voices, until now. Their lives have been changed forever.

War Child : a child solider’s story by Emmanuel Jal. Though most people will not know this author’s name, he is one of Africa’s top hip-hop artists. This book is literally a rags to riches tale but one that begins in horror. In the mid-1980’s Jal was only a seven year old boy when he got conscripted into the army during Sudan’s civil war. As a young child he marched through miles of desert, with dead and mutilated bodies, and carrying a gun he could barely lift. This book tells of how Jal went from a soldier to a rapper. HRL has a documentary film of Jal’s story as well.

Canada is generally been known as a nation of peacekeepers of adult age here is a book to remind us of our history. Gary Browne’s Forget-me-not: fallen boy soldiers – Royal Newfoundland Regiment, World War One. It is hard to believe that at one time boys lied about their ages in order to go fight in distant wars. Browne tells unforgettable stories of young Newfoundlanders, some as young as 15. It is hard to imagine someone my son’s age going to war.

They Fight Like Soldiers : They Die Like Children is by Canadian Senator, humanitarian, author and retired general Roméo Dallaire. Just the title of this makes me weepy. It is one thing to volunteer to fight for your country but to be forced into it, especially as a child, is a sin. Dallaire first encountered child soldiers during the Rwandan Genocide of 1994. There he faced the dilemma of being a professional soldier facing ragtag children shooting at you. How would you response ….while they are fighting they are soldiers but when they are killed they are children once again. Dallaire has made it his mission to end the use of child soldiers. Hopefully the world will follow.