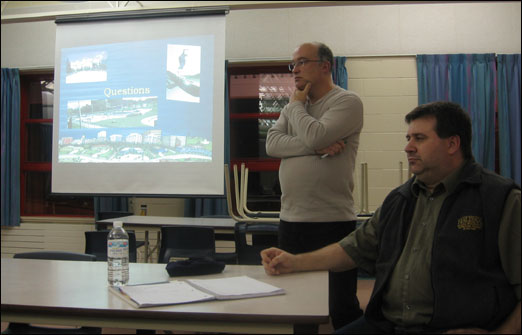 B SPAT Chair Mark Ward (left) and HRM Community Developer Darren Hirtle listen attentively to questions and comments from B SPAT members and Bedford residents hoping to get a skate park in Bedford.

The message was clear on Wednesday evening-we want a skate park!

Members of the recently formed Bedford Skate Park Action Team (B SPAT) and HRM held a workshop at Basinview school on how to go about getting a skate park in Bedford.

Sackville, Beaverbank and Fall River were some of the places named that have recently added a skate park in their community.

Hirtle explained to the audience the two main types of skate parks-concrete and modular.

Although skateboarders generally prefer concrete, there are pros and cons to both types.

A concrete skate park would be permanent. A combination of styles are available to choose from. A professional designer would be brought in from out-of-province to build it. A concrete park has the disadvantage of taking more time to build and costs slightly more than the modular type.

A modular skate park on the other hand is quicker to build, with lower costs. It can be made of wood, masonite, skatelite, steel, pre-cast concrete or asphalt.

The equipment can be placed on existing concrete, and the park can be changed, added or removed easily.

The big question is, where to start?

It has already been determined that a skate park in Bedford is needed and wanted, by many adults and youths.

The group needs to be committed, motivated and passionate about the project.

Hirtle emphasized the need to “start planning and organizing now.”

There will be obstacles and the group needs to be prepared to work with people in the community who don’t want a skate park.

The support of Councillor, MLA and MP is key. If B SPAT has their support, leaders will fight for funding on the group’s behalf.

Volunteers are also a crucial part of the fundraising process. B SPAT will need to be formalized for raising funds. Residents of Bedford will be more comfortable giving money to a registered group so they know “you won’t take off to Hawaii,” says Hirtle.

The next big question is, how will B SPAT get the funds?

The first thing to do is create a budget. Show everyone in Bedford that B SPAT is serious about getting a skate park.

Two-thirds of the funding can come from HRM and the Province. The skate park committee and the community need to come up with the rest.

Hirtle recommended the group start now with the fundraising. When it is time to approach HRM for money, B SPAT will be taken more seriuosly if they see that some funds have already been raised.

HRM Park Planner Therese Delorme has been assigned as project manager for the group.

Delorme gave lots of advice to the group. She explained having a project plan on paper. A couple of pages is all that’s needed to clarify some points. Provide a clear description.

Delorme also told the group to emphasize the impact and benefits of having a skate park in Bedford. It would be wise to point out that a skate park would get kids off the streets and allow youths to be more physically active.

Hirtle encouraged B SPAT to find some partners. Bedford Lions are more than willing to help and provide support and funds. In exchange, B SPAT could help out with events around Bedford, like helping out with the selling of Christmas trees.

So, what’s next for B SPAT?

The team will keep on sharing ideas and plans.

A brainstorming session with Therese Delorme will probably be scheduled in late January.

Although a group of teens got up and left the meeting when they heard that a skate park will take time, most are enthusiastic and ready for the hard work ahead.

What a great experience for these determined kids, and what a satisfying accomplishment when they set “wheels” on a new skate park!

Hopefully “there’s nothing for teens to do in Bedford” will be removed from everyone’s lips.

Join “Who wants a skate park in bedford!” on Facebook and show your support!

Committe members of B SPAT are as follows: