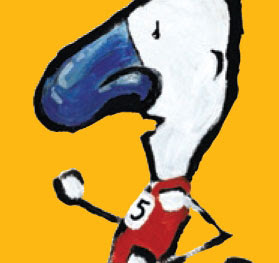 This past sunday I participated in the Blue Nose Marathon in Halifax. It was a lot of fun and the race seems to be getting better each year.
Below are some random thoughts and observations from my experience on Sunday.
1)You should never yell “You’re Almost there” to a marathoner who is only a few kilometers or less away from the finish line. This seems like an encouraging thing to say, but at this stage of the race each step for the runner is sheer agony. The finish line is all the runner can think about and telling him he’s almost there fills his head with false hope that his anguish may soon be over.
2)Yelling “Looking strong” is the best thing to say to a runner. For some reason this encouraging statement always gives me a boost, especially when I know I look anything but strong.
3)People in Dartmouth are really nice. Not that the Halifax supporters weren’t great, but the folks on the other side of the harbour were special and so genuine.
4)Shubie Park is beautiful. Perhaps the highlight of the marathon is the 20 minute stretch through Shubie.
5)Never underestimate the adrenaline rush of race day.
6)Hard working course marshals are a god send. You would think that pointing and yelling “this way” would not be a big deal, but the marshals who take it seriously and try to do a good job are highly appreciated by marathoners. When I’m on mile 22 and I’m starting to have visions and feel like I’m going to fall down at any moment, I need that coarse marshall yelling at the top of their lungs and pointing dramatically. The guy leaning on a post and pointing with his finger…not as helpful.
7)Blasting “I’m in Miami Bitch” on a speaker the size of Theodore Tugboat at the entrance to Point Pleasant may not be the best thing. I could literally feel the sound push me back as I ran past the dj booth from a local radio station. Good intentions, but may need to be fine tuned.
8)”Give’ er Hill” at about mile 24 in Dartmouth is a cruel, cruel joke. One of the friendly folks from Dartmouth yelled, ” What did you think of the hill ” after I made it to the top. I still have no idea what I said but I doubt it was coherent. He laughed regardless.
9)It’s not shameful to take walk breaks on the back half. This was a strict no no for me but I finally broke down and walked a few times during the last five miles. I felt much better about it when I noticed the people running in front of me weren’t getting any further away.
10)Running without headphones is the only way to do a marathon. I know every runner has their own philosophy but I just think by listening to loud music the entire way you’re really missing out. All the shouts of encouragement, clapping, and the sound of runners coming up behind you, is what makes the event so special. Plus you shut yourself off from conversation with other runners. If you’re going to be running for 4 hours you may as well talk to people to pass the time.
11)Always latch on to an older marathoner who knows what their doing. One of the most difficult things when running a marathon is pacing yourself. I always try to find a runner who I can tell has ran a lot of marathons and has a good pace. Then I stick to them like glue for as long as possible. If they want to keep to themselves, I’ll stay 15 feet behind. More often than not they’re up for exchanging war stories of past marathons and will give you a lot of great secrets.
This year I met up with a 51 year old man named Wendall from Chilliwack, B.C. Wendall had qualified for the Boston Marathon a month earlier in Vancouver. Not only was his pace perfect for running beside but the conversation was outstanding. Wendall pulled away on me around mile 16 and finished with a time of 3:47. Looking strong Wendall!
12)I do not like running in heat. Give me that cold and wet weather of previous Blue Nose Marathons anyday.
13)Breaking up the start times was a brilliant idea. It makes sense for all competitors. 10K speedsters don’t have to worry about slow but steady marathoners, and 1/2 marathoners are able to finish their races without so much human traffic like there has been in previous years. A great idea that shows the Blue nose committee is very committed to making the event better every year.
14)How great was the kids run on saturday. I went out to cheer on my friend’s son and it was a lot of fun. It helped that the weather was fantastic.
15)Thanks to SMU Director of Athletics, Steve Sarty, for giving haligonia.ca a plug as I ran by his family. Go Huskies!
Finally, there wasn’t a lack of water stations….but about 15 more would be perfect.
Bill McLean lives in Halifax and has been running for several years. Listen to Bill McLean Sports Show every tuesday at 10:30 am on ckdu.ca or 88.1 FM. Email bill@haligonia.ca.

What To Yell to a Marathoner and Other Random Thoughts from the Blue Nose
https://haligonia.ca/what-to-yell-to-a-marathoner-and-other-random-thoughts-from-the-blue-nose-16661/