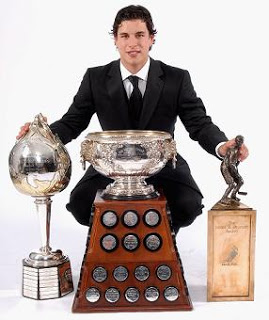 Another Bandwagon, CROSBY BASHING?
With the Stanley Cup in full swing and the playoffs down to just four remaining teams, it would make sense that even with his team out of the playoffs that the “Lets Bash Crosby” bandwagon would still be in full effect.

Heck, let’s ignore the fact that the Blackhawks have a two game lead over the number one team in the league, or that the Habs just came back in a huge way against the Flyers with a 5-1 win tonight.

Instead, let’s do what hockey fans do best and bash on a young talent who has done nothing but give his heart and soul to the NHL, Canada and hockey fans across North America.

The kid is just 23 years old and this is what his resume looks like:

But somehow fans still find the need to bash on the Canadian Hero who won helped make the dream possible in Vancouver and win the country Olympic Gold.

When groups like the IIHF come out and bash Sidney Crosby for not going to their World Championship, it’s clearly not about the hockey. The IIHF World Championship has only ever drawn North American attention when it is hosted in North America, without big names coming to play when it is held overseas they lose out. I can only assume this is the reason for their recent media temper tantrum.

As sports fans we need to understand that athletes are human and they need time to recover, relax and refocus. In the last 12 months he has won the Stanley Cup, Olympic Gold and the Rocket Richard trophy, not to mention six rounds in the NHL playoffs (losing just one matchup).

Sid will win Canada plenty more Gold at the international stage and hopefully add to his already overfull trophy case, so give the kid a break and let him enjoy summer off.

While you’re at it, how about we focus on hockey that’s being played and enjoy a playoffs that has been full of excitement, upsets and big games.

**Editors Note: The IIHF has since come out and apologize for including Sidney Crosby in their press release bashing players for not coming to the IIHF championship.

Where's the Love for Sid the Kid?
https://haligonia.ca/wheres-the-love-for-sid-the-kid-16658/