Every Wednesday for the past few weeks I’ve been attending pottery classes. This involves two hours of utter failure as I squish clay into shapes that can be described as “sort of bowl-like” or “vaguely resembling an evil, Good Son-esque, kid’s demented art project.” 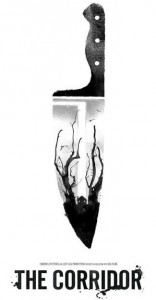 Because of that, I will not be doing much tonight. But, Halifax, I’m looking out for you. While I’ll be toiling over my pottery wheel, quietly cursing, you have the opportunity to see one of the best feature films produced in this region in a long time and one of my favourite movies of 2010.

Halifax, you should show up to the Oxford Theatre early for the 7 PM screening of THE CORRIDOR. It’s FREE and it’s awesome so it’ll be busy. The Corridor was directed by Evan Kelly and written by Josh McDonald and stars a cast of talented locals. I had the opportunity to see it at last year’s Atlantic Film Festival and was extremely impressed.

This film has been described as Stand By Me meets Evil Dead. It also bears the honour of being one of the last movies to have actually scared me. Before that it was Martyrs. Holy cats!

This film follows five best friends through a male bonding weekend they will never forget. They’ve been best buddies for more than a decade, but now they’re changing – getting married, getting promoted, going bald, and going crazy. During a much-needed weekend away to bring them together, they discover a special corridor through the woods – an impossible hallway where none should be. It will take these five men into fear, betrayal and the biggest change of them all…

So I’ll be missing out on a movie I enjoy for the sake of lame pottery, but you don’t have to, Halifax. March down to the Oxford tonight and see THE CORRIDOR. Show that you support local film… and try not to be too scared. I’ll be thinking of you as I punch my clay into submission.