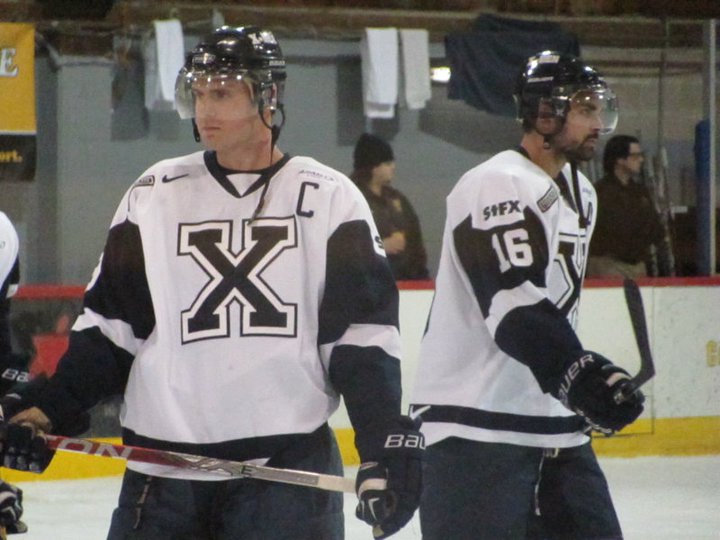 X-Men Knock Tigers out of Playoffs

With playoff hockey returning to the Dalhousie Memorial Arena this weekend, the Dalhousie Tigers faithful packed the house Saturday afternoon and watched their Tigers lose on a Bast goal with just ten seconds left in the game.

It was a cruel way to end the series and knock the Tigers out of their first playoff appearance since 2004.

Goaltender Josh Disher stood on his head for much of the game and did his best to keep the home side in the game, playing shutout hockey for forty minutes.

The Tigers gave their fans plenty to cheer about early on, with Benjamin Brealt and Daniel Bartek both coming close in early moments but denied by solid goaltending from Joseph Perricone.

Brealt came closest to breaking the deadlock with a hard wrist shot that beat Perricone but denied by the post.

In the closing moments of the period Sean Donovan hit Brett Thebrege from behind and was sent to the box for hitting from behind and given an additional 10-minute misconduct.

The X-Men managed to kill off the penalty, but as their penalty expired the visitors were caught with too many men on the ice and ended up back on the penalty kill.

While Bartek and Brealt continued to create chances in the second period, it was Benoit Gervais that gave the Tigers the lead. The defensemen playing on the top forward line picked up a rebound in front and put it over a helpless Perricone.

The Tigers held a one goal lead going into the third period but found themselves on the penalty kill just a few minutes in.

Taking their chance, St. FX tied up the game after a pass by Kevin Undershute was deflected off of Brett Plouffe’s skate and past Disher.

The visiting side took the lead soon after when Undershute found a wide open Chris Hulit alone in front and he buried his goal into the open net.

However, the scrappy Tigers found a way back into the game with Bryce Swan in the box for tripping, Jacob Johnston crept in from the blue line and squeezed a second chance effort past Perricone and tied the game.

The fairy tale ending was not to be, with the X-Men calling a time out on an offensive zone face-off with just a few seconds left in the game.

Executing a perfect play, Jason Bast scored off the face-off win with just ten seconds left in the game. It was a crushing end to a spirited game and the Tigers can leave proud that they played one of their strongest games of the season.

Henry is a contributor to Sportstream.ca and part of the Bill McLean Sports Show on 88.1 CKDU every Tuesday Mornings at 11. You can follow him on twitter at HenryWhitfield, where he live tweets his thoughts during each Mooseheads games