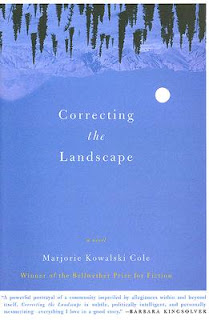 Is newspaper publishing as we know it coming to an end? Stories abound in the press of late of the struggle of newspapers to make ends meet and remain viable. Much was made this past February of the Denver Rocky Mountain Times publishing its last edition. The National Post is cancelling it’s Monday edition as a cost cutting measure over the summer. Our own local paper the Daily News folded last year and the Chronicle Herald has recently cut much of their staff. Pretty soon fiction may be the last frontier of newspapers. Check out one of this fictional accounts of the newspaper industry while you’ve still got the real thing to compare it to.

In Correcting the Landscape by Marjorie Kowalski Cole an idealistic small town newspaper editor takes on big development. For it’s depiction of a battle between development and the natural world book won the 2004 Bellwether Prize for Fiction which recognizes literature in support of social change.

For a satirical look at the current crisis in the newspaper industry through the guise of a murder mystery try Black & White and Dead All Over by John Darton (an author has spent 40 years in the employ of the New York Times.) When a newspaper editor is found dead in his office the detective in charge has too many potential suspects to consider. Publishers Weekly said: “William Randolph Hearst meets Agatha Christie… Loaded with subtle social commentary and wry humor, this highly intelligent whodunit will keep readers guessing.”

Newspaper publisher Hunter Greene finds him at the centre of a different sort of uproar in In Greene Pastures by Kendra Norman-Bellamy. When the Greene claims in print that the death of a popular local priest was not the accident it appeared to be, local readers cry foul and accuse him of trying to create a scandal to sell papers. The pastor’s daughter is the source of the story, as well as a source of romantic interest for Greene, but something just doesn’t add up.

Cityside by William Heffernan harkens back to a different era of newspapers – but where the seeds of our current troubles were already being sown. In this novel, reporter Billy Burke is handed a gem of a story – one that pulls heartstrings, sells papers and could even line him up for a Pulitzer. But when he realizes that everything isn’t quite what it seems, he has to decide between the lure of the story and his conscience as a journalist. Kirkus reviews says “Set during the simmering summer of 1975, when journalists everywhere are lusting for circulation-building exposs that can top Watergate, Heffernan’s peppy tale crackles with profane, darkly comic insider lore…” 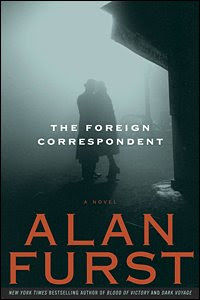 Step even further back into another journalistic era with The Foreign Correspondent by Alan Furst. From a master of spy stories this is a tale of journalists on the eve of World War II: “By 1938, hundreds of Italian intellectuals, lawyers and journalists, university professors and scientists had escaped Mussolini’s fascist government and taken refuge in Paris. There, amid the struggles of émigré life, they founded an Italian resistance, with an underground press that smuggled news and encouragement back to Italy. Fighting fascism with typewriters, they produced 512 clandestine newspapers.” (Book Jacket)

Xtra! Xtra! Read All About It!
https://haligonia.ca/xtra-xtra-read-all-about-it-1958/