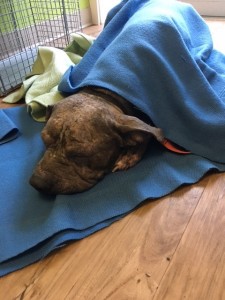 A Yarmouth area woman has been handed a $500.00 fine for failing to provide an animal with adequate medical attention when the animal was wounded or ill; contrary to section 22(b) of the Animal Protection  Act of NS. Sunday Wallace, of Yarmouth was sentenced July 4, 2017 in Yarmouth Provincial Court.

In November 2016, an SPCA officer attended a property occupied by Ms. Wallace while investigating a complaint that alleged there was dog living at the residence that was very thin and in extremely poor condition. Upon inspection of the dog, it was noted that the dog was suffering from a severe skin infection and needed immediate medical care. Ms. Wallace was ordered to have the dog treated by a veterinarian immediately, but later that day released the dog into the care of the NS SPCA.

It was determined that the dogs condition had progressed so far due to lack of any veterinary intervention over an extended period of time and  that euthanasia was the most humane option for the dog.

Chief Inspector Jo-Anne Landsburg stated, “This is an unfortunate, sad and preventable case that should have never happened. I realize that not everybody can always afford veterinary care, but that does not take away our responsibility to properly care for our pets – their wellbeing is our responsibility. I am disappointed that a period of prohibition was not included as part of the sentencing.”