Thrillema keeps getting better, friends. Robocop was good fun, though I expected to see more cardboard-box costumes. One thing I really enjoyed about this event was the short-film shown during the pre-show, which was both was deranged and amazing. It’s called “I Live In The Wood” and it will haunt me wherever I go. Stop-motion animation remains a thing of terror, for me, and if you don’t agree please check out the work of Jan Svankmajer.

One new film-screening was announced during the pre-show: ALIENS is going to be screened at the end of March. I am salivating already. I might try to construct a face-hugger from paper-mache, or something, for the occasion.

Here are a few pictures from last night. It was another packed show, with a hilarious, raucous crowd. My favourite moment of the night might’ve been when the crowd was asked, “What is the only thing that can defeat Robocop?” and someone yelled out, “DARTMOUTH!” And rightly so! 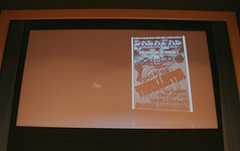 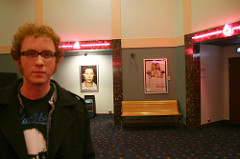 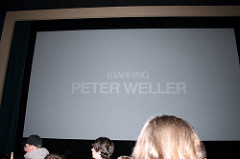 I kind of love Peter Weller and described him as being “Dune-y looking”… because that sure makes sense. Not sure if I’m making it to the My Bloody Valentine showing on February 12th (just watched it last weekend), but I encourage others to do so, as the film’s director, George Mihalka, will be there for a Q&A.