The Lieutenant Governor’s garden party was a fun event this year and what glorious weather! It was held in the Royal Artillery park because of renovations to Government House and for the first time ever, The receiving line, which went on for almost the entire duration of the tea. You were asked your name and then presented to the Lieutenant Governor. I made a ninny out of myself and said something along the lines of “I’m charmed to meet you”. Ack. Embarrassing. I don’t think Ive ever said that to anyone in my life. Here she is , The Honorable Mayann E. Francis. A very attractive and intelligent woman! The tables were festooned with rose petals and there were dipped strawberries and tarts, fruit and cheese. Waiters drifted about with silver trays of cucumber dill and chicken salad sandwiches. 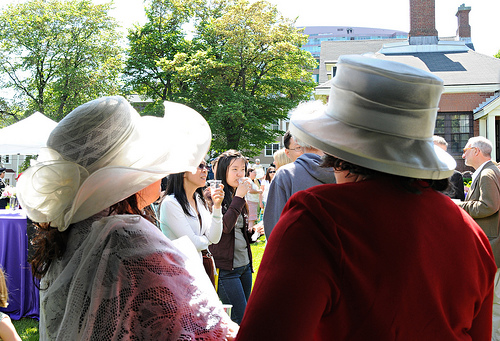 Being asked to pour the tea is an honor and there were several women and girls who did an admirable job. One of whom was Emily of the Emily Fund, which raises money for insulin pumps for kids. It is a charity that the The Honorable Mayann E. Francis has taken on. Everyone was decked out in summery hats and business wear. Boy Scouts and Girl Guides were also on hand to help out. Music was supplied by harpists on one side and a small orchestra sitting under the trees on the other 🙂