“When the Taliban took control of the Swat Valley in Pakistan, one girl spoke out.

Malala Yousafzai refused to be silenced and fought for her right to an education. On Tuesday, October 9, 2012, when she was fifteen, she almost paid the ultimate price. She was shot in the head at point-blank range while riding the bus home from school, and few expected her to survive. Instead, Malala’s miraculous recovery has taken her on an extraordinary journey from a remote valley in northern Pakistan to the halls of the United Nations in New York. At sixteen, she has become a global symbol of peaceful protest and the youngest nominee ever for the Nobel Peace Prize.

I Am Malala is the remarkable tale of a family uprooted by global terrorism, of the fight for girls’ education, of a father who, himself a school owner, championed and encouraged his daughter to write and attend school, and of brave parents who have a fierce love for their daughter in a society that prizes sons.”

Lives of the Family (M)
by Denise Chong (Oct 8)

“In 2011, Denise Chong set out to collect the history of the earliest Chinese settlers in and around Ottawa, who made their homes far from any major Chinatown. Many would open cafes, establishments that once dotted the landscape across the country and were a monument to small-town Canada. This generation of Chinese immigrants lived at the intersection of the Exclusion Act in Canada, which divided families between here and China, and 2 momentous upheavals in China: the Japanese invasion and war-time occupation; and the victory of the Communists, which ultimately led these settlers to sever ties with China.

This book of overlapping stories explores the trajectory of a universal immigrant experience, one of looking in the rear view mirror while at the same time, travelling toward an uncertain future. Intimate, haunting and powerful, Lives of the Family reveals the immigrant”s tenacity in adapting to a new world.”

“One of the greatest sports figures of all time at last breaks his silence in a memoir as unique as the man himself. Number 4. It is just about the most common number in hockey, but invoke that number and you can only be talking about one player — the man often referred to as the greatest ever to play the game: Bobby Orr. From 1966 through the mid-70s he could change a game just by stepping on the ice. Orr could do things that others simply couldn’t, and while teammates and opponents alike scrambled to keep up, at times they could do little more than stop and watch. Many of his records still stand today and he remains the gold standard by which all other players are judged. Mention his name to any hockey fan – or to anyone in New England – and a look of awe will appear. But skill on the ice is only a part of his story. All of the trophies, records, and press clippings leave unsaid as much about the man as they reveal. They tell us what Orr did, but don’t tell us what inspired him, who taught him, or what he learned along the way” 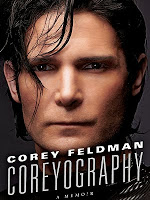 “Lovable child star by age ten, international teen idol by fifteen, and to this day a perennial pop-culture staple, Corey Feldman has not only spent the entirety of his life in the spotlight, he’s become just as famous for his off-screen exploits as for his roles in such classic films as Gremlins, The Goonies, and Stand by Me. He’s been linked to a slew of Hollywood starlets (including Drew Barrymore, Vanessa Marcil, and adult entertainer Ginger Lynn), shared a highly publicized friendship with Michael Jackson, and with his frequent costar Corey Haim enjoyed immeasurable success as one half of the wildly popular duo “The Two Coreys,” spawning seven films, a 1-900 number, and “Coreymania” in the process. What child of the eighties didn’t have a Corey Feldman poster hanging in her bedroom, or a pile of Tiger Beats stashed in his closet?

Now, in this brave and moving memoir, Corey is revealing the truth about what his life was like behind the scenes: His is a past that included physical, drug, and sexual abuse, a dysfunctional family from which he was emancipated at age fifteen, three high-profile arrests for drug possession, a nine-month stint in rehab, and a long, slow crawl back to the top of the box office.”

“In the 1960s the two biggest bands in the world—the lovable Beatles and the bad-boy Rolling Stones—waged an epic battle. “The Beatles want to hold your hand,” wrote Tom Wolfe, “but the Stones want to burn down your town.” Both groups liked to maintain that they weren’t really “rivals”—that was just a media myth, they politely said—but on both sides of the Atlantic, they plainly competed for commercial success and aesthetic credibility. In Beatles vs. Stones, John McMillian gets to the truth behind the ultimate rock ’n’ roll debate… With the sophistication of a historian, the storytelling skills of a journalist, and the passion of a fan, John McMillian explores the multifaceted relationship between the two greatest bands of our time.”

5 Nonfiction Titles to Look for in October
https://haligonia.ca/5-nonfiction-titles-to-look-for-in-october-83237/