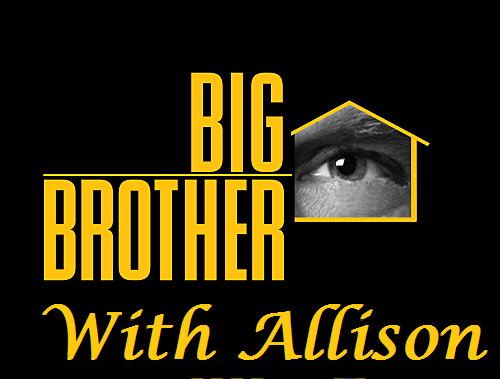 Eviction time means Julie time. Tonight’s outfit I deem a hot steaming mess. A three-piece suit of pink pastel? Where do the pants start and the blazer ends? It’s like looking at one of those pictures within a picture, and, oh no, I’ve gone cross-eyed thinking about it too hard.
Back to the show
After the POV ceremony Porsche seems fairly confident she is safe. At the same time Keith has a lot of faith in his alliance and thinks he is also very safe. Someone is definitely going to have some egg on their face by the end of this.
Darling do you swing? Your vote that is
Jeff realizes that they need some swing votes to keep Porsche around. So what does that entail for the Veterans? Horrors of horrors, it means having to make friends with the Newbies. Glad Big Brother gives them wine, it makes it a lot easier to make friends. Apparently they play a game called Big Bootie? Has anyone heard of this? Later outside the house the housemates make their own music using pots and pans and have a super-fun dance party.
Another tactic to get the swing vote was to target Adam, the superfan, and let him think he’s a part of their team by picking an alliance name. This reminds me of what parents do to prepare a child before a baby is born. “Why don’t you pick out an outfit for the baby? You are such a good big brother.” A note to all future older siblings, run it’s a trap, don’t believe anything they say. This baby is getting all the attention.
Boo-key we’re going down
After the superfun dance party slowed down Brendon and Rachel had a fight over, “Boo-key.” What is that you ask? That’s their pet name for each other. In case you might not understand the proper pronunciation, think the word pookie with a ‘b.’ Rachel began yelling for her Boo-key and Brendon became enraged because it was so emasculating. Oh here we go! Rachel doesn’t understand why he is upset and like every dysfunctional couple to calm down the situation she holds him and says, “I love you” he stands there stoic and ignores her. I will admit that I feel for Rachel – why do guys become so cold? If any guy is willing to tell me why a man shuts down like that and it is perfectly fine, the floor is yours. Then they began to talk about this sacred nickname and why it should never be uttered so liberally. And then I thought, this is what hell is like? Hell is being forced to watch an awful couple break-up, make-up, break-up, make-up….
See Dick Speak
As usual Julie talks to the Housemates, and as usual it’s just as awkward as when my Dad meets a guy I’m dating. She plays a video of Dick explaining to the housemates that he left the show because a friend needed him. His explanation was pretty vague but I trust it was important enough.  He also, gives a special message to Danielle that he wishes they could spend the summer together. Danielle was surprisingly emotional after the message when speaking to Julie. Come on guys, pull it together and be a family. Please!
Live Voting Commences
After the usually empty speeches by the nominees it’s time to vote.
This part is pretty boring but I was surprised to see that Kalia and Shelly were swayed by the Veterans and Adam was a bad boy and stuck with the Newbies. As well, during the live voting Danielle wanted to reiterate that she does care and is thinking about her father. Aww!
“Keith, I mean you acted a fool. You like a time bomb.” – Lawon
Well Keith, you totally got played. His departure was fairly polite, no going around accusing people of betraying him. During his sit down with Julie he sounded really emotional and his eyes looked like they were on the verge of tears. Trust me, it’s the same face I make when I realize that I renewed my lease with my roommate Sarah. Julie asked Keith the most obvious question, “Why on earth did you throw the veto?” He really didn’t seem to have an answer, he was just too cocky. Next she showed him the goodbye messages, and dayum housemates, kick a guy when he is down. Cassi was right, Keith came in to this game as if it was on a dating show. Lawon’s was the BEST goodbye speech as the above quote proved. I loved how BB kept the “sad music” even though none of the speeches were nice.
Hole in the Head, Hole in One: HOH Competition #2
This is a classic HOH competition. Housemates have to hit a large golf ball closest to the hole. Rachel got to choose the order and of coarse the Newbies were first, then the Veterans. Dominic was first and stayed in the lead over Adam, Cassi, Shelly, Lawon and then Kalia tied with him. That feeling of accomplishment was short lived when Jordan got even closer. After that both Jeff and Brendon just gave up and Jordan was deemed HOH.
So who will The Veterans choose next? If they are smart they will get rid of Dominic and Adam.
Will Lawon and the girls get to be Haves this week? Maybe I should try the BB diet? Talk to you next Monday.
Other Thoughts: