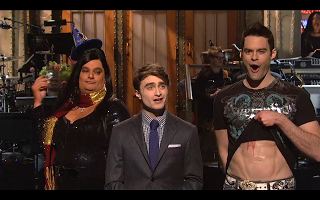 I have fairly high hopes for Daniel Radcliffe’s hosting gig this week. This tiny Brit has proven to the entertainment world that he is more than Harry Potter. I notice in interviews he has a nervous energy so I am not sure how live TV will work for him.  However, he is now experienced on Broadway so I have faith in the little guy.
Also, Daniel and my sister have the same birthday. She’s mentioned it a few times in her life so I feel the need to share with everyone.
Here’s hoping there isn’t a weird time delay like last week’s episode. Sheesh!
Opening – Mitt Romney
As usual the cold open is election related. Jason portrays Mitt as someone desperate to show he is human and relatable. He reminds everyone all the things that he “really enjoys” and that he has “five human sons.” And speaking of his sons, my God have you seen them? They are like weird handsome copies of him.  Anyway, since Mitt got in trouble for saying the phrase, “I like firing people,” the writers has fun with this. As Mitt orders breakfast he wants the special but asks to “fire” the bacon and see if he can get an English Muffin hired on a temporary contract. This was the first cold open in a while I really liked. A good start!
Monologue 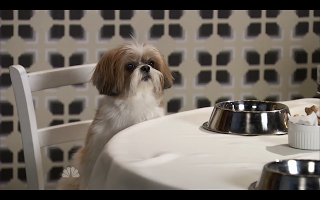 Aww, Daniel is so tiny. Did a spell make him this way? Anyway, Harry, I mean Daniel tells the audience that he requested no Harry Potter skits.  Skit examples he thought of were, Dumbledore working at Harry Pottery Barn, Harry Pot Head or the worst idea, Jersey Shore-Hogwarts. As Daniel says these things, actors dressed as the characters walk by and I am treated to a glimpse of Bill Hader’s The Situation and Bobbi Moynihan’s Snooki. Then just like that, they were gone and I was super disappointed. I love Bobbi’s Snooki! Well let’s start the show.
Target Lady
The sheer fact that no one clapped when Target Lady was introduced was a big sign. The character is old. Poor Daniel, his first real skit of the night and it is bombing. He’s got all the enthusiasm in the world but this skit is not working.
Ricky Gervais Hosting
Remember that time Ricky Gervais hosted the Golden Globes and he “shocked” people? Well NBC is really milking his hosting gig again. It’s pretty silly because he really wasn’t that bad. Anyway, SNL makes fun of the hype by imagining all the other award shows he could offend at. Jason’s impression is perfect: high pitched and very smarmy. Also, if someone at SNL is reading, can this dog be a permanent cast member?
You Can Do Anything
A talk show with untalented guests who post things on YouTube and believe they “can do anything.” This skit is a comment on how this generation (excluding myself because I know I am awesome, JK) believes they are perfectly capable of anything and even if they fail people should applaud them for trying. This skit was written with such malice at people like this it was kind of uncomfortable. I feel bad for people who post things and think, “I’ll get noticed someday.” The only part that saved the sketch for me was Daniel’s high flying jig. Look at his legs fly.
Spin the Bottle
What is this weird pre-taped skit? It’s not a Digital Short but has the same tone. (Speaking of Digital Shorts has anyone seen Samberg this episode?) Daniel plays Dave, a kid forced to play spin the bottle but somehow always lands on one of the many random hobos. So many hobos that a new circle had to be made. 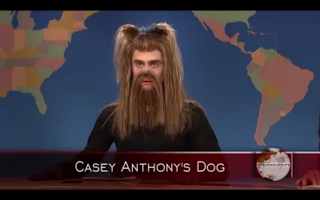 I am getting a little tired of skits involving dudes kissing each other. It’s just not funny anymore. And kissing hobos? Isn’t that just like the skit from Jason Segel’s episode? Good for Daniel for being fearless but this was NOT a good payoff.
Delaware Fellas
First of all, I have seen Jersey Boys and you know what? It’s worth the $150.00. SNL brings to you Delaware Fellas, a musical kind of like Jersey Boys. They sing songs like “Strut Like a Man” and they kind of have Jersey accents but not really. Again, little Daniel had all the eagerness in the world during this skit but it was not funny. And I learned that Delaware has no National parks.
Harry Potter 2020
So here is the Harry Potter sketch I knew would be written. I am so excited because there are so many possibilities. And then this sketch bombs! Harry visits Hogwarts to welcome the new students but it turns out he never left and is stuck in the past. The only funny part of the sketch was the dead on impressions of the cast, especially Hader’s Professor Snape. But that was it. Maybe they should have got Rachel Dratch to play Harry.
Weekend Update
Seth’s first guests are Kim Jong Il’s childhood friends. (You remember these characters?) They are so proud of their friend but you know, sometimes he acts a little insensitive and has a bit of an ego. I have reviewed these characters before so not going to bother. But I love the way they finish off with Seth talking about Lorne Michaels in the same high pitched voice.
Seth’s next guest is Casey Anthony’s new terrier played by Daniel. First of all the make-up job was hilarious yet it was borderline nightmarish.
Casey’s dog is having a “ruff” time living with her. He thought there should have been a screening process to his being adopted. For example, he hoped if someone calls themselves Casey Anthony the reply should have been, “We’re all out of terriers.” The dog also shares with us Casey’s internet history which included, “How to kill your dog.” This stuff is so cruel but so funny. I really do wish the real dog all the luck in the world. Also, I was pleasantly surprised Daniel showed up on Weekend Update. Usually the hosts don’t appear in this segment so this was a pleasant surprise.
Joke of the night:
Pub that is serving beer for dogs: “Oh, so they are selling Miller Light.”
Glenda Okones
Glenda Okones (Wigg) is running for office and to counteract any attack ads on her, she makes her own attack ads. She wants people to know that she has a naturally frowny face, she interrupts people and she loves her youngest child over the oldest buy a lot. Kristen was funny as this odd character but I felt it was out of context. Is she trying to make fun of a certain person, or was this a character a creation. I thought this was funny the first time but was surprised when this similar skit ran three times. I swear after a commercial break it was one of these ads, then went back to commercials again. Allison doesn’t like to wait for comedy.
2112 reflects on 2012
Imagine it’s the year 2112. Now imagine how laughable our silly little lives in 2012 can look from the future?  This skit was hard to describe but I found a couple of things funny in it. First, Taylor Swift will assassinate someone and that wolverines will be domesticated. That is all.
The Jay Pharoh Show
This has to be the most self aware yet saddest sketches I have ever seen. Jay is known as that guy on the show who does really good impressions and nothing else. So in this skit Jay interviews Daniel but only does his impressions and doesn’t care about his guest. What? Is this Jay’s last show? What was this? So Jay plays into what the critics have said about him and proves what? That he can’t do anything but impressions. He just gave up didn’t he? Again, a waste of Daniel.
Exit Poll
Here’s how this sketch was written: “Last sketch of the night? Ummm…. Get Kristen to do something silly.” And that is what this sketch was. It definitely deserved the last block of the night.
I am so disappointed by tonight’s show. (Sorry, if my whole post comes across super cranky.) Poor Daniel seemed eager and ready to try things but the writing just wasn’t strong enough. Sometimes I complain that having too many repetitive skits is boring, but taking a chance on a lot of new skits sometimes doesn’t work as well. Or maybe I should take a nap.