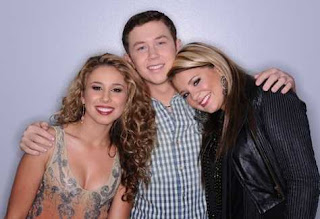 Lauren and Scotty have been pimped as frontrunners on American Idol for so long, it feels like Haley doesn’t have a chance of making the finals. She spent the first half in of the season in the bottom three, and the judges seem to heap undue criticism onto her rather than anyone else in the competition.

Beyonce mentored the contestants for their own song choices. I thought she gave them some decent advice, especially when she told Lauren about how she is playing a character on stage.

Scotty McCreery – Amazed
Scotty actually chose a song that I don’t hate, but he ruined it with his affected, twangy, over-countrified singing. Look, I actually do like some country music. I don’t have a hate on for the whole genre. But I hate that almost yodeling type crap he does on every note. What is it, scooping the note? Anyway, I hate it. I know the kid will be in the finals and probably win, but I just can’t stand him.

Lauren Alaina – Wild One
I like Lauren a lot, but I didn’t think it was her best performance. It didn’t show off her vocals as well as some other songs could have, the outfit was horrendous, and it just wasn’t very memorable. I’d like to see Lauren do a Taylor Swift song, actually. She has a stronger voice than Taylor, and the youthful feel to her tunes would suit her. I think she could really knock “You Belong With Me” out of the park.

Haley Reinhart – What Is and What Should Never Be
You know what? I love a girl who can rock a Led Zeppelin song and still be excited to meet Beyonce. The fact that Haley got to sing with her dad playing guitar was really cute, and I thought she rocked the performance. I love her voice, I think she’s an energetic and charismatic performer. She fell, which was super unfortunate and embarrassing, but what can you do? She got back up and continued performing like nothing had happened, and you’ve got to give her props for that.

Round One Winner: Haley Reinhart (And the judges agreed!)

Scotty McCreery – Are You Gonna Kiss Me or Not?
Why do male country singers think it’s fun to squat when they sing? That is all. That’s my whole review.

Lauren Alaina – If I Die Young
I didn’t realize I knew this song until Lauren started to sing it, and it was a great choice for her. She looked adorable, too, especially since the lyrics mentioned pearls. I really like Lauren and I think she could be a star. I love Haley, but since I think this will come down to Lauren and Scotty, I really hope she wins it.

Haley Reinhart – Rhiannon
How gorgeous was Haley’s dress? She looked AMAZING. Oh yeah, and she sang beautifully. The song choice was perfect, but what she did with it was just magical. I think Haley has a spectacular voice, and I want her to win this.

Scotty McCreery – She Believes In Me
Here goes, I’m gonna hit you with three observations: The pianist had a lovely fedora on during this performance. My mom thought it would have been funny if he’d come out with his hair buzzed after Jennifer asked if he’d do it. I couldn’t differentiate this song from anything else he’s previously done. Boom.

Lauren Alaina – I Hope You Dance
This was a perfect song for Lauren, and she looked beautiful singing it. Like she was going to prom, but prettier than your typical teenager. I think this was one of her best performances. It seems like Lauren pushed herself to go for bigger notes this week, and she nailed them.

Haley Reinhart –You Oughta Know
I wish they’d stop covering this song on Idol because the cleaned up lyrics are dumb. That said, I thought Haley rocked it. I still like her best when she’s doing jazzy type stuff, but I loved seeing this edgier side of her. In fact, since I’m not a huge Alanis fan I actually preferred it to the original.

Round Three Winner: Tied for Lauren and Haley (It’s like comparing apples and oranges)

As you can tell, I am not a Scotty fan and have basically given up judging him. I’ve been getting a bit of hate mail over the past few weeks because of this and all I can say is, bring it on. You want to send me ignorant musings on why you think everyone should like all the same stuff as you? Go for it! I live for crap like that. I’d love to see Lauren and Haley in the finals because even though Haley tends to play to my tastes, I think they’d both make great winners.

What did you think of the episode? Who won the three rounds?