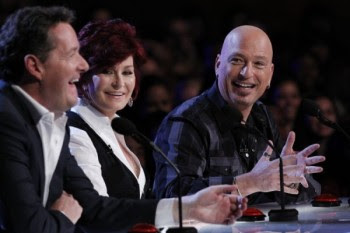 America’s Got Talent was on again on Wednesday night, and after watching my first ever episode on Tuesday night I was back for more. I’ve got to say, though, I’ve always sort of resented shows that expect me to tune in more than once a week. (And that includes you, American Idol!) Does anyone know if after a while this second episode will become a results show of sorts? Because I have no problem skipping those.
Nerds and Nards

First up in the Dallas auditions was ArcAttack, a “technological entertainment group”. Howie and Piers seemed blown away by the performance, which had a bunch of nerds playing music while one got struck by lightning. I was with Sharon – no thanks. How is allowing oneself to be struck by lightning a talent? It just makes that one person stupider than the rest of us who know better!

The next performance was even weirder – the guy introduced himself as a “genital daredevil”. I think all male viewers cringed almost as much as Nick Cannon did when the guy declared that he’d “need a hand”. Ew, where? Sharon and Piers X-ed the guy as soon as he pulled his pants down, but Howie wanted to see the trick, I guess. The area in question was blocked with a big “America’s Got Talent” logo, so all I knew was that it involved some lighter fluid and his…you know. And that’s all I needed to know.

The dog show was lost on me, since my heart only warms for cats, dachshunds and hedgehogs. The audience ate it up though, and I knew Sharon would go wild for it – I saw her reality show back in the day. I dug the guy who declared his talent as “breaking stuff” because I recently got into the show “Chuck” and it is now my life aspiration to become a ninja super spy.

The adorable 18-year-old kid who sang “Somewhere Over the Rainbow” blew my mind. Someone get that kid a record deal right now! He was so nervous and cute and Jason Mraz-y, I loved him. The guy who was playing a turkey baster was significantly less talented, but it still kind of broke my heart when he got buzzed off the stage so quickly. We also saw what was possibly the world’s worst magician and a vampire/singer who must perform on the cruise ship from hell.

One of the most ironic performances came from a woman who was blind in one eye and juggled fire and knives. That’s right. Blind. In one eye. With knives and fire. They actually cleared the first few rows of the audience. I noticed that her occupation was listed as “Psychological Examiner”…perhaps she should take a look at herself and the ambitions behind her hobby? Miraculously, she made it through to Vegas. So did 11-year-old rapper CJ. I’ve never been a huge fan of child rappers. He sounded as though Eminem had sucked in helium (and learned a few dance moves).

And that was it for the Dallas, Texas auditions of America’s Got Talent. Despite my dislike of shows that air more than once a week, I found myself pretty into this show once again. Which act was your favorite?

America's Got Talent: But was there much in Dallas?
https://haligonia.ca/americas-got-talent-but-was-there-much-in-dallas-18132/