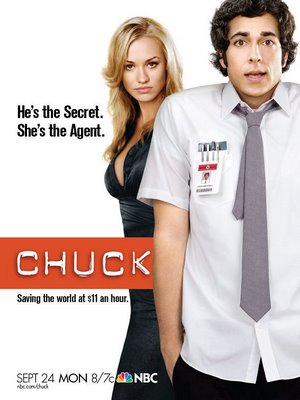 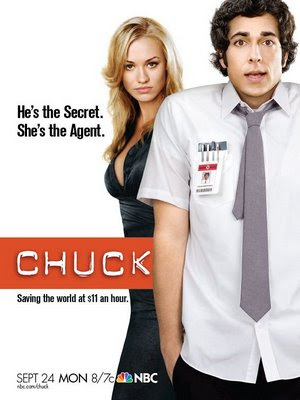 Welcome to the first DVD Flashback Friday post! I introduced the new concept for Couchtime last week and listed some shows that I plan on catching up on this summer, as well as some ones I’ll review and suggest to you guys.
So I’ve finished my first project – the first season of Chuck. Chuck airs on NBC and will be going into it’s fourth season this fall. It’s been recommended to me many times and has an incredibly loyal fan base. There was even a “Save Chuck” campaign when it was unclear if NBC would renew the show for a third season. I’m glad they did, because I’m hooked. In fact, immediately after finishing season one I went out and bought season two and dove right in.
Nerd Turned Super Spy

Chuck is a comedy and action show about an average, nerdy but adorable guy named Chuck who gets an email from an old college frenemy. He was a frenemy because they’d been best buds until the guy framed Chuck for cheating on an exam and got him kicked out of Stanford. And stole his girlfriend. (These aren’t really spoilers, you learn it all in the first couple minutes of the first episode.)

Chuck is part Get Smart and part The Office. There are great action sequences and it’s hilarious watching Chuck bumble his way through missions – his usual task is “Stay in the car!”. But Chuck’s day job is working as a member of the “Nerd Herd” – a team of geeks who fix computers at the local big box store the Buy More. Anyone who has ever been overqualified and under-appreciated can relate to those scenes, and it only becomes funnier once Chuck starts moonlighting as a spy. 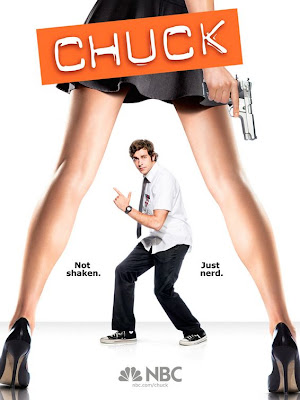 The combo of comedy and action in Chuck makes it different from anything else I’ve been watching lately, and the characters turn it in to a really fantastic show. Chuck is a super-likable everyman who hadn’t been living up to his potential and is now being pushed to new limits. Sarah and Casey, the agents who protect him, are funny, mysterious and exciting. Then there’s Chucks sister Ellie, and her boyfriend “Captain Awesome” who are both doctors, both in the dark about Chuck’s new hobby, and wish that he’d start living up to his potential and get out of the Buy More. And the show is rounded out by a cast of nutty characters who work at the Buy More with Chuck.

What’s great about Chuck is that it’s a show everyone can enjoy. It’s got action, comedy, suspense and romantic story arcs. I’ve been watching it with my boyfriend, and he’s just as obsessed with it as I am. I’m several episodes in to the second season and still loving it. This one is a winner, and I’d highly recommend you check it out.