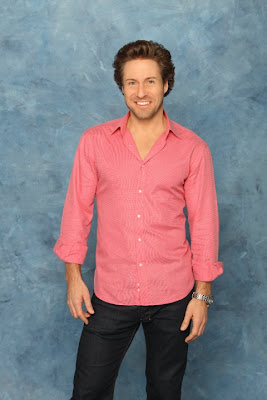 I spoke to ousted Bachelorette contestant and villain on Thursday, and he had a lot to say. Seriously, a lot. The guy belongs in politics – he was like Rod Blagojevich on The Celebrity Apprentice, but with far better hair.

One of the more surprising admissions was that during the five days he spent on the show, he wasn’t really feeling it with Ali. And when Ali confronted him before the rose ceremony, it showed.

Then why go on the show? Craig said he went on the show with the “sole purpose” of possibly finding love, but also for the experience and to have a good time. But how good of a time did he have? Most Bachelorette viewers will remember Craig for his aggressive personality and the confrontations he had with Jonathan, the weatherman.

Craig said his behavior was taken out of context and that he was actually joking around the whole time.

“I’m definitely non-confrontational, and I’m not a serious person like that. Like I said, they – you know, with the editing, they caught me just obviously me not having a – you know, having the laughs and smiling.”

Craig said he wasn’t upset at the producers for editing him in a villainous light, though. Overall, he had a great experience. “I had a great time with a bunch of guys and, you know, laughing and everything else…I can’t say I’m upset with the producers…it did make it an entertaining two episodes for me.”

Craig said the only real disagreement he got into was with Jesse (you might recall Craig asking Jesse if his mom did his tattoos) and they apologized to each other the following morning. What did bother him was Jonathan’s description of him as “dangerous”.

“That kind of shocked me that, you know, he would use a word [dangerous] like that. I found it kind of offensive because I was totally joking the entire time…I find that very off size, that I’m ‘dangerous’. I’m not even –, you know, I’m a very laid-back, easy-going person, non-confrontational, and I found that was very offensive.”

So did the weatherman ruin Craig’s chances with Ali when he started throwing around the “dangerous” word? Maybe a little, but Craig thought Ali sensed that there was no connection between them and wasn’t surprised to be eliminated. As for the other guys in the house, Craig thinks there are a few guys who could possibly be the one for Ali.

“I think there’s three guys I think would probably be a good pick. Kirk for sure is one, Roberto and Chris L. I think those three probably have a good fit for Ali.” (The three guys are pictured below, respectively.)

As for Craig, he’s still looking for the one. Someone who is “a very smart woman with a great personality, great sense of humor, obviously attractive, just easy-going, and a natural person.” And he’s interested in working in the entertainment industry (no surprises there!). After all, he’s got the hair for it – and the gift of gab.

Do you buy that Craig was just joking around the whole time, or should he think about a new career in PR?

Interview with The Bachelorette's Craig McKinnon: He just wasn't that into her
https://haligonia.ca/interview-with-the-bachelorettes-craig-mckinnon-he-just-wasnt-that-into-her-18124/