It feels like forever since ANTM was on – in fact, I’d forgotten that sweet little Jaclyn was eliminated last time. And do you know why? Because Canada is a week behind! What the hell, Canada? How did you let this happen? I’ll have to try and catch up online.

This week (or last week, for most of y’all) the remaining girls traveled overseas to Morocco. Did we talk about how pretty the landscape is? Did we spend more than 0.8 seconds on how exciting it is for a girl from a trailer park to get to see a faraway country and new culture? No. We talked about how no one likes Alexandria. Again. 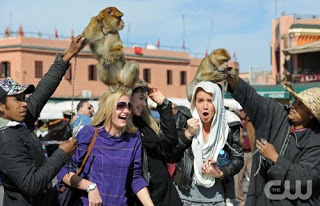 Though the real villain emerging is the sourpuss otherwise known as Molly. “Oh my gosh, a caaaaammmeeelllll!”, Alexandria squealed. Molly told her to stop shrieking in her ear. I was with Alexandria – it’s a camel. Get excited. Molly said she’s mad all the time because she’s adopted. OK, I know I’m not adopted and can’t really relate. But I was definitely thinking “It could be worse, kid. You could have not been adopted.”

I loved Brittany talking about how where she comes from, if you see a snake you kill it, skin it, eat it, and hang the skin on the wall at the bar where she works. Huh. That sounds way worse than being adopted. Then some monkeys sat on the girls’s heads and Alexandria freaked out. I was glad we got to see the girls explore Morocco a little, because it looked SO amazing.

The girls went to visit a North African fashion designer who made beautifully artistic pieces, and they were to walk for them for Andre Leon Talley. Poor Kasia, though, couldn’t find an item that would fit her “fiercely real” body. I felt really, really bad for her. They finally found something, but her confidence was shaken. Molly didn’t walk well and, of course, blamed her “ridiculously long” dress. Welcome to fashion, dear. Kasia seemed to manage to hide her hurt feelings when she walked, and she was the only girl who’d packed her heels. 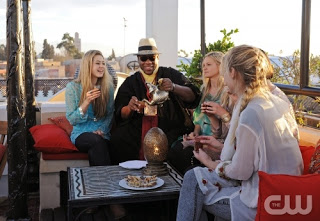 Next the girls had tea on a rooftop with Andre Leon Talley. Honestly, could there be a better experience? A beautiful location, an intimate setting with an influential figure in fashion…and still, Molly looked like a sourpuss.

The girls checked out their gorgeous new digs, which came with two single beds and one giant bed. Alexandria and Holly managed to snag the two small beds, which meant Kasia, Brittani and Molly would have to sleep together. Well, you’d think someone had told Molly that she was going to have to sleep on a bed of nails with a monkey. Girl! It’s a bed! Get over it! Besides, someone would be getting eliminated soon anyway. What a Debbie Downer.

For the photo shoot, the girls would be posing with camels. Brittani looked amazing and she seemed to get comfortable on the camel very quickly. Her poses were amazing. Truly amazing. Molly tried to act like she’s not a bitch, which must have been exhausting for her. Unfortunately, she nailed the shoot. Damn. I really wish she sucked at modeling.

Kasia struggled with looking comfortable on the camel, and then she had a bit of an emotional breakdown. I felt bad because she was clearly going through a bout of low self-esteem, but you can’t really have that at this stage in the competition. With her rough shoot and the desperate “I really want this but I’m getting eliminated this week” edit she’d been getting all episode, I was worried for her.

Alexandria was back at her old habits by acting like the director of the shoot rather than the model. Her shoot did not seem to go well, at all, which gave me hope for Kasia. Once she stood on the camel, though, it looked like she’d get a good shot.

Hannah was desperate to stand out from the crowd this week, and I think she did. She’s so, so pretty and she was posing beautifully on the camel. I love Hannah, and even though I don’t think she’ll win I really hope that she does.

Tyra must have ridden a camel to panel, because she was wearing a horse jockey outfit this week. It was cute, it was cute! But weird.

Brittani: I loooooved Brittani’s shot. It was stunning. She showed off the clothes, and she looked phenomenal.

Alexandria: I didn’t love Alexandria’s photo, but I did like how strong it seemed. Up close, though, her face wasn’t great. She’s definitely delivered better photos, and with her attitude on set I think she deserves to go.

Kasia: Kasia’s photo was good, and I liked how her face was angry-pretty. She’s done better, though, and it was nowhere near as good as Brittani’s.

Molly: I really wanted Molly’s photo to be awful, but it was great. I still hate her attitude, though, and I don’t think her face is that unique or pretty.

Hannah: I absolutely loved Hannah’s photo. I thought she looked stunning, and it was edgier than some of her past shots. I’m glad that Tyra said her film was amazing, too. I want the judges to give Hannah more props.

I wasn’t sure who would get best photo – I liked Brittani best, followed by Hannah, but the judges really seemed to like Molly. I knew Alexandria and Kasia would be in the bottom two, and I was hoping Alexandria’s bad habit of interfering in the shoot would get her eliminated. How many times does that girl need to be warned? However, the judges didn’t like Kasia’s photo at all, and the Italian Vouge editor didn’t think she’d put either the photo or Kasia in general in the magazine, and that’s not a good sign. 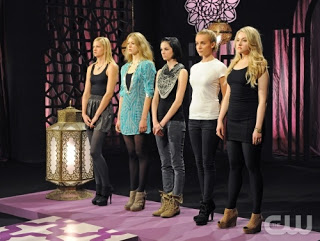 Molly was called first (blech), followed by my girls Brittani and Hannah. And in the end, Alexandria was selected to stay instead of Kasia, because her photos are stronger and more consistent. But what about her attitude?! Ugh. I was sorry to see Kasia go. We’re now left with four girls, and I like two of them. It looks like we’re getting ready for a Brittani/Molly final two, don’t you think? I’d rather see Hannah there, but I know she’s not memorable enough. I’ll be rooting for Brittani all the way.

Now, to find the most recent episode since Canada has screwed me over…