Wow, Thursday night’s episode of Grey’s Anatomy was packed with drama and excitement, wasn’t it? So much was going on, I was worried that some of the storylines would get under-services, but luckily everything seemed to come together nicely.

On the personal side of things, Callie and Arizona’s wedding was full of drama from the outset. Arizona’s parents were beaming with pride, even though her dad “The Colonel” had everything scheduled down to the millisecond. Callie’s dad was rolling with things well, but her mom was quite the mood killer. Not only did she refuse to get excited about or involved in the wedding festivities, but she wouldn’t even hold her grandchild.

I understood why Callie’s Catholic mom was struggling with the situation. Her daughter had a baby out of wedlock and was marrying a woman. It’s a lot to get over. But one would hope that, for the sake of her daughter and her granddaughter, she would get over it. It was heartbreaking to watch Callie hear her mother say that the wedding was a joke, but I really think the hardest part was her total disapproval of the baby. If she was going to give in anywhere, she should have at least held her grandkid. 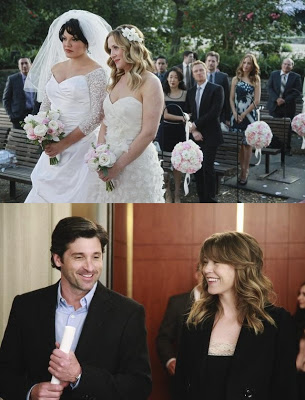 That said, I’m glad the episode didn’t end with everything peachy keen. Yes, they went ahead with the wedding and it was beautiful. And I’m glad Callie’s dad showed up to dance with her – that seemed appropriate, since he’d been managing to be supportive all along. But I’m glad her mother didn’t come. It’s more realistic that way. As much as I love Callie and Arizona as a couple, their situation with Mark and the baby is really weird. The uncomfortable family dinner was a good way of acknowledging how complicated and unconventional their situation is, and it would have been difficult to believe that Callie’s mother came around so quickly. It’s a far better storyline that the mother-daughter relationship could be on the rocks for a while, or possibly forever.

Meanwhile, on the personal front, Derek and Meredith got married too! I loved how the scenes of their strictly paper wedding contrasted with the scenes of Callie and Arizona in their traditional white dresses, having a big wedding that unfortunately won’t be legally recognized. Derek and Meredith were already married, via post-it, so this was just for the baby. 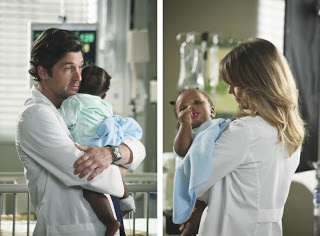 Yes, the baby! I knew Meredith and Derek would adopt one of the Africa kids as soon as I saw a photo of them online, each holding the little girl. She’s so adorable, and it made sense for them to adopt. It’s been a year since the shooting and Meredith’s miscarriage (possibly longer in Seattle Grace time, I’m not sure) and it was a natural progression for them to think about adoption.

As the race for Chief Resident heats up, it seems like it could be anyone’s to take. Even residents who I didn’t think had a shot, like Avery and April, are moving into positions where they could maybe take the job. Avery is working directly with the Chief on a study and is doing really well, and April received a rare, glowing recommendation from Stark. I loved how enthusiastically April took on Alex’s Africa kids project, learning important phrases in Swahili and preparing common African food in order to try and get her terrified patient to eat something. It’s what makes me love April – Grey’s did a good job of keeping on the two likable characters from the Mercy West debacle and making them well-rounded, lovable characters that we actually care about. Even at Callie and Arizona’s wedding, April was adorable as she bounced around snapping photos of the happy couple. It’s as though she’s always been a part of the show, and their lives.

Alex’s project was so impressive that he earned a slow clap from the attendings, and made his competition nervous. It’s very unclear if Cristina is in the running for Chief Resident. Right now, she’s not, because Teddy has her benched. But even if she’d genuinely apologized to Teddy (and still, I’m not sure she should – she saved Callie’s life), wouldn’t she still be out of the running for the gig because her husband is choosing Chief Resident? Isn’t she disqualified whether she rocks a bunch of crazy heart surgeries or not?

Meredith, obviously, would be a likely candidate for the job but we’ve yet to see if her tampering with the Alzheimer’s study will come back to haunt her. I feel like it will, because otherwise they wouldn’t have used Alex to stress the seriousness of her actions. But…we can’t really have a show if Meredith isn’t a doctor, can we? I’m not sure what will come of this.

Overall, I really liked the episode. I liked how Alex’s project with the sick African children managed to intertwine all the storylines, and I like how, as they’ve been doing almost all season*, Grey’s managed to hit the perfect balance of sweetness and sadness.

*I say “almost” because we all know the Musical Disaster is the exception to the “Grey’s has been on fire this season” rule.

I liked how all the characters seemed to be used in this episode. Bailey convinced Callie not to give up on her wedding after her mother walked out and the one minister who would perform a wedding ceremony for two women cancelled. Bailey even ended up nervously officiating, which was great. She could have come across as too preachy, but the fact that she was so nervous took any pretension away. There was also a really sweet moment between Arizona and Mark, when she broke down in front of him about how much she missed her brother. I wish we’d seen them take a moment at the wedding in honor of him, but just seeing Mark hug Arizona was a really nice scene.

In somewhat of a cliffhanger, the cute grief counselor guy asked Teddy to move to Germany with him. That could somewhat complicate her secret marriage. The thing is, I only really like Teddy when she’s with Scott Foley. So I’ll be happy if she stays on the show with him, but I won’t mind if she runs off with this other guy never to be heard from again. It would at least give Cristina a fresh start.

What did you think of the episode? Did your heart break for Callie? Do you think Mer and Der’s potential baby is, like, the cutest ever? Who do you think will get Chief Resident?