Um, guys? Are people actually taking makeup tips from a toddler on the Internet? Who was that child on America’s Next Top Model this week? And most importantly, if she’s famous WHY AREN’T I? I obviously have everything it takes to become viral. Instead I end up with a viral disease. (The flu! Get yours minds out of the gutter, you guys!)

They’ve Got The Music In Them

Why on earth was there a music challenge on America’s Next Top Model? I don’t want to hear these girls sing! If I felt like listening to people try and sing, I’ve been recapping X-Factor. But I’m not, because I don’t. It’s all I can do to continue watching American Idol every year.

Seriously, this challenge was awful. The girls couldn’t have written cheesier, more generic songs. It was embarrassing. And my girl Allison was struggling. You know why? Because she’s a freakin’ model, not a singer! But she wrote a song about her father dying, and that was sweet.

Lisa won the challenge, which kind of made me sick. I really can’t stand her and I want her to go away.

When the girls went to make their viral videos, they had to inset “pot ledom” into their songs. Because it’s “Top Model” backwards. What? What the hell is this? Is Tyra Banks on crack? This was literally the worst thing I’ve ever watched. I don’t know what was worse, having to see Shannon rap or seeing Alexandria wear sunglasses in the studio while she shrieked her song and then talk about how she could totally be a recording artist. Poor Allison cried over having to insert that stupid phrase into her personal song, but she actually ended up being not bad and was the least obnoxious of everyone. 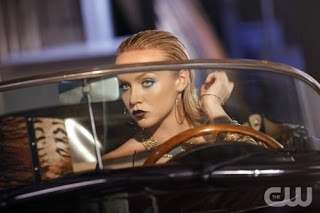 Yeah. Definitely didn’t know who “Game” was. But that’s because I’m a white, privileged nerd. It’s to be expected. 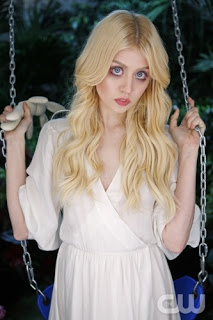 Dominique’s song was called “Tooch Your Booty”? Are you kidding me? Alexandria’s video for “Go, Go, Go” looked like a late night internet “dating” commercial. Then Tyra showed up in a “Pot Ledom” unitard with feathers attached – she looked like an extra from a Cee-Lo Green performance…on acid. Again, have I said that this episode was just THE WORST? This show has officially gone off the rails.

Laura was infinitely better at being a cheesy pop star than she was at singing. Allison’s video was my favorite (obviously) because it was actually vaguely cool, and even Game was into it. Plus she looked like a model and, you know, that’s still the name of the show.

What this entire episode taught me was that autotune can make anyone sound good, and therefore I should be a pop star. Move over, Ke$ha. 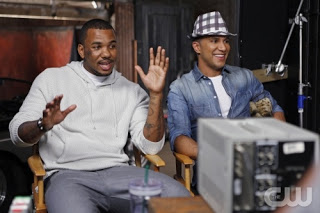 You know a modeling show has jumped the shark when the guest judge has facial tattoos. Just sayin’.

Dominique: This was the dumbest thing I’ve ever seen. Who was that person with Tyra? An Internet sensation? Am I that out of the loop?
Laura: Was this softcore porn? If they’d left the camera on any longer, it would have turned into that.
Angelea: I’m pretty sure I could make something better than this on my webcam.
Alexandria: Sorry Dominique, I was wrong. This was the dumbest thing I’ve ever seen.
Shannon: Considering how out of place Tyra and that other dude looked in this video looked, I was terrified to see Allison’s video.
Lisa: I hate Lisa the most because she obviously thinks she’s really cool. She’s not.
Allison: I mean, you know, whatever, it was the least awful of all. And I got a kick out of how much Game loved how weird Allison and her eyes are.

So the judges definitely seemed the least impressed with Angelea. Personally, I couldn’t imagine eliminated anyone from a MODELING competition based on this crap.

Allison was called first, which obviously I was happy about. Even though it was for such a dumb project. Lisa was next, followed by Dominique, Laura and Shannon. Predictably, Alexandria and Angelea were in the bottom two. Angelea got to stay, which was good since I’ve never really liked Alexandria.

So what do you guys think? I’m pretty sure this might be the worst episode of reality TV I’ve ever seen. Honestly, atrocious. I might have to stop watching America’s Next Top Model because, frankly, I’m only asking to be put through this crap by turning it on in the first place.