We’re in the home stretch, guys!

We began the episode talking Little Laura and how she came from a small town that had cows. Lisa talked about how Laura’s the biggest competition, yet no competition at all. I was reeeeaaallly hoping that Lisa’s confidence was a sign that she’d be going home this week.

Battle of the Blogs

With only four girls left, it was time for the models to prove their worth to the Vogue Italia editor Franca Sozzani by writing a blog post about fashion and style in Greece. (If only I were taller, skinnier and prettier – if I were on ANTM I bet I would have rocked that challenge!) This challenge seemed like it was Allison’s to lose. However, Laura actually keeps her own blog, albeit a photographic one – and, as Laura pointed out, her dyslexia is a challenge. And I’m no Angelea fan, but I liked that she looked for not only an urban area, but somewhere a little poorer that would remind her of where she came from.

Later in the episode, Nigel and Franca discussed the blogs. Allison’s was too short and pretensions, Laura’s was boring but sexy, Lisa’s was unique and Angelea’s was the clear winner despite her explosive personality. Franca chose Angelea to win, and she was awarded a trip for two back to Greece. 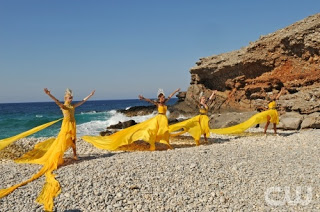 Tyra “directed” the girls this week in a “motion editorial” for her new “novel”, Modelland. I haven’t read this book, but I’m pretty sure it’s horrible. I hope we can still be friends, Tyra, but I had to say that. The shoot took two days and I have to say, I really dug the styling. I can’t say the same for the acting. 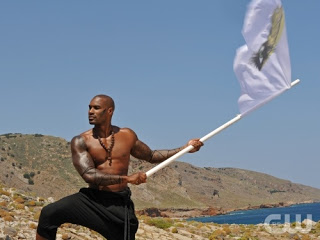 I mean, seriously, the scenes from the book they acted out? Tyra and Jay talked about how Laura’s overacting made it more like a Saturday Night Live sketch than, well, whatever it was they were trying to create, but it was ALL like a bad episode of SNL! All of it!

On the second day, Tyson Beckford showed up (and lookin’ fiiiine, btw) to work with Tyra and the girls. Can we talk about how crazy crazy crazy Tyra was doing her weird Modelland thing? So crazy. So I bet she was really in her element.

And Then There Were Three

So, the video…did Tyra use her iMac to make that? Um, yeah. It wasn’t even weird, it was just stupid. Let’s pretend it never happened.

There were no photos, so there’s not much to talk about here. Especially since we’re pretending that horrible video doesn’t exist.

Everyone, especially Tyson, was impressed with Angelea. It seemed like people really liked Lisa, too. And that left my two favorite girls to be critiqued – Laura and Allison. Tyson didn’t respond to Allison because she’s shy and quiet, and considering Allison had declared more than once during the episode that she hoped to actually win it this time, I was worried the video would be her incredibly unfortunate swan song.

Obviously, it was a hard decision – the judges argued over Laura vs. Allison for over an hour and a half. Ken Mok yelled at them to make a decision! Finally, the girls were brought back in. Angelea was called first. Going into this episode I thought she was the weakest in the pack, but she really brought it this week. Next Lisa was called and, as predicted, it came down to my two favorite contestants. I honestly didn’t know who I thought should go home, I wanted these two as the final two from the beginning. I like Allison better personally, but I think Laura has done a better job overall this cycle.

Allison got to stay. I have to say, I was surprised – and god, I hope she wins it. I feel bad for Laura. She did a great job this cycle, and I think she’s a really excellent model. I’m sad she didn’t make it farther.