CMT was experiencing technical difficulties, but thankfully last Friday night’s episode of Sweet Home Alabama was posted online for losers fans like me who maybe possibly checked the website to see if it was up yet three times twice a day for the last six days. And what an episode it was! We saw a nasty girl fight break out right in front of Tribble himself, we saw several intimate one-on-one dates, and we saw Tribble make what we probably the most emotional eliminations yet. Oh, and we saw Ashley Ann get sent packing! I think that deserves a “Yee-Haw!”, don’t you?

For the first date, Tribble took New Yorker Jackie out to a fancy casino in Biloxi. This was more in Jackie’s element than the previous mud-covered dates the whole gang has been on, and she and Tribble seemed to have a great time. But am I the only viewer out there who just doesn’t get it? Sure, Jackie seems sweet. But personality…I haven’t seen it, have you? I just don’t see the same connection there that Tribble seems to have had with other girls, so I was surprised by the final decisions. (Which, sadly, I knew in advance.)

I have to say, I’ll be a little bit disappointed if Tribble ends up choosing Jackie. I guess she just doesn’t seem like much fun? Tribble seems enchanted by how graceful and elegant she is, but at least on television that comes across as stiff and even a little false. Plus she referenced The Notebook, which I hate. So there’s that.

The next date went to Courtney, who’d yet to be on a one-on-one date with Tribble. Maybe it’s just her looks, but Courtney seems too young for Tribble to me. She seems more like Tribble’s kid sister, not his girlfriend. They spent their date at a local speedway where Courtney had spent a lot of time with her family, and Tribble was even introduced to Courtney’s uncle.

That said, Courtney and Tribble did seem to have chemistry. They laughed a lot, and Courtney seems very sweet and down to earth. It was cute when she said she doesn’t normally kiss on the first date.

I was most jealous of Mandy’s one-on-one date, because she and Tribble went to New Orleans – a city I’ve always wanted to visit.

Mandy is a girl I really didn’t expect to like, but she totally won me over. Funny, blunt and totally herself, but also really sweet – she makes it hard not to like her. Plus, she looked really pretty for the date.

It was nice to hear Mandy talk about her son, how having a baby changed her life and how hard she’s worked to make a nice life for her and her son. Mandy really opened up to Tribble, and I think it was obvious that he liked her. But it was also kind of obvious that a relationship wasn’t in the cards for them. Mandy has a kid, and is so settled in the town where she lives. Tribble wouldn’t be able to just move there to date Mandy – I think various seasons of The Bachelor have proven that, and Mandy can’t uproot her life either. I think Tribble needs to end up with someone who has a little more flexibility in her life. But it sure looked like a fun date.

And then there was the group date. Oh man. It also had something to do with cars, but who cares about that? It was all about the girl drama.

Even before the real cattiness began, trouble was brewing. Jackie was quietly telling girls the details of her date, and not everyone was willing to hear it. Cassie mentioned that no one needs to hear details like that, and Tristan wondered if Jackie was a little too NYC Sex And The City for the South. Cassie and Tristan seem like the last two girls in the house who would say those things without merit, so I think Jackie probably did cross a few lines.


But it all really started when Ashley Ann leaned over to Cassidie and told her that Jackie had said she was dumb. At first, Cassidie reacted like you’d expect – she didn’t believe Ashley Ann. But I guess Miss Vickers must have persisted, because Cassidie ended up in tears. Jackie immediately denied it, Mandy and Courtney leaped to her defense. Tribble came and sat down, and pretty soon it was all on the table – no one likes Ashley Ann, and Ashley Ann knows it.

It looked like a lot of red flags were exposed when it came to Ashley Ann. Tristan was hesitant to partake in the drama, but when Tribble mentioned that Ashley was upset that she saw him kiss Mandy Tristan was compelled to let him know that it wasn’t the kiss, but who he kissed. And when six girls who Tribble trusts are all saying the same thing, it would be a stupid move to ignore it.

When elimination time came, Tribble needed to send three girls home and he’d thought long and hard about whether Ashley Ann would be one of them.

Cassidie was the first girl Tribble sent home, and I was sad to see her go. Tribble seemed really torn up about the decision, and it seemed like he’d gotten to a difficult point where no matter what he’d be sending home a girl he had some kind of connection with. Jackie’s gotten a lot of dates and clearly has some kind of inexplicable connection with Tribble, but I was really hoping Cassidie would be the last city girl standing.

Next Tribble sent Mandy home, and again he did it with tears in his eyes. It was obviously a hard decision, even though it was the right one. Mandy handled it like a champ though, didn’t she? It just goes to show, don’t judge a book by its cover. Ashley Ann may have put on a Southern belle front, but it was the “Hunter/Honky-Tonk Bartender” who had real class. I hope Mandy meets a nice guy in her hometown. And I hope she never wears overalls and a backwards baseball cap for a photo shoot ever again.

And then it was Ashley’s turn. Fake until the last minute, she swore up and down to Tribble that she was “there for the right reasons”. Ugh, how I hate those words. Tribble seemed unsure about his decision, but he also didn’t seem as emotionally overwrought as he did when he sent Cassidie and Mandy home. Now that we all know Ashley Ann’s been spotted with Jake Pavelka, I’m guessing Tribble must be feeling pretty glad that he went with his gut and took the advice of the other girls to heart. 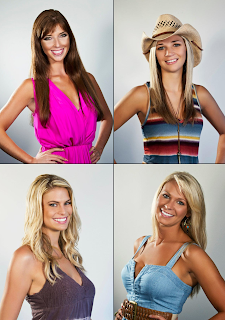 So, we’re down to the final four and only have two episodes left! Jackie’s the only city girl left. I would have been fine seeing Tribble end up with the right city girl, like Cassidie or Michelle. But y’all know how I feel about Jackie, so I’m hoping Tribble ends up with one of the three Southern blondes. But which one?

I like Courtney, but I don’t think her relationship with Tribble can really compare to what seems to have developed between he and Tristan and he and Cassie. So my guess for the final two is Cassie and Tristan – but from there, I have no idea. Both girls are gorgeous and seem like great matches for Tribble. What do you guys think? Who are you rooting for?