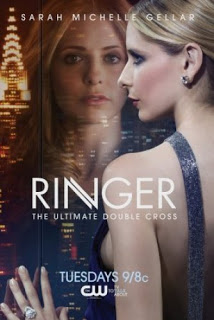 Talk of an exciting twist on this week’s episode of Ringer got me eager to watch the episode…and it ended in disappointment.

If you follow the blog and my Ringer posts regularly, then you know I’ve felt pretty lukewarm about the show. It was already decided that Revenge is the show I should have been watching all season, and I’m not sure I’ll be watching Ringer in 2012. But I hate giving up on a show, so I was hoping “That’s What You Get For Trying To Kill Me” would pull me back in. It didn’t.

The big twist (obviously, please don’t read on if you still plan on watching) was that Siobhan returned to New York and, upon seeing that Charlie had killed Gemma, shot him and staged it as though he’d killed himself. OK. Was that really all that surprising? Well all know Real Siobhan is a bad person. I mean, look at everything she’s done – and we still don’t really know why she’s doing all this. Is she redeemed for feeling sad that her best friend died? No! She put her there!

Meanwhile, Bridget told Andrew she loves him and slept with him, which was a good plot development – now Bridget has a reason to stick around, and there will likely be a love triangle including her old flame Marcus. Speaking of whom, he figured out the truth about Charlie – but Siobhan took care of that before the police could find him. And, Juliet lied and told her friend that Logan Echolls raped her. While this solidifies Juliet’s character as a villain when that had been iffy before, it’s a shame to see Jason Dohring in such a snoozer of a storyline. I’m glad he didn’t actually engage in a relationship with her, but what happened couldn’t have been more predictable. Any teacher with half a brain knows you don’t close the door when you’re alone in a classroom with ANY student, let alone one who likes you.

The only way this could turn around is if Gemma’s not really dead, because before shooting her (again!) Charlie revealed that Siobhan is still alive. If Gemma is dead, what was the point of that? But since Ringer exhausted its cheesy “I’m not actually dead!” storyline with Gemma surviving the first gunshot wound, I’m not sure there’s any recovering from this.

I think the closing credits were a good indicator of what’s wrong with Ringer. The show has never managed to strike the right tone, and nothing could have suited the episode less than using Adele’s “Rumor Has It” to close out. Great song, but what does it have to do with anything? Besides, maybe, Juliet’s upcoming storyline which is a C Plot at best. I was Ringer to get it right, but it sadly never does.