Poor Cochran. Whether he made his self-proclaimed “big move” out of fear of choosing the wrong rock, a revenge of the nerds style attempt to take down his bullies, or the desire to shake up the game with a strategic move, I think we can all agree now that it did not work.

At the beginning of the show, Cochran gathered together the entire tribe minus Edna and made a plea to be kept around for one more round. The last Tribal Council had revealed that despite the sacrifice he made for their tribe, Upolu was still planning on voting him out in seventh place.

Sorry Cochran, but this was a dumb move. Instead of making a plea based on strategy and offering the people on the bottom of the totem pole a chance to improve their ranking, Cochran tried to argue that they owed him for what he did. That they were indebted to him. Buddy, this is a game! No one owes anyone anything! Sophie was not a fan of the speech, later telling her tribe that she felt just as indebted to Edna, who they’d been using and abusing since day one (my words, not hers) than Cochran, who they’d only been using and abusing for a few Tribal Councils.

What Cochran should have done was what he did later in the episode – target the people at the bottom of the Upolu totem pole to team up with him. Edna. She should have been the first person he talked to instead of the only person he didn’t include in the conversation. “Hey Edna, I’m seventh and you’re sixth. Want to go find numbers four and five and make a move?” That’s where he should have started. 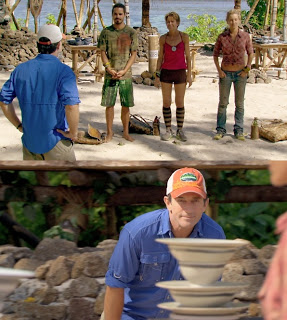 Truel time! The “Duel” this week was Ozzy vs. Dawn vs. Whitney. I have to say, I was really rooting for Dawn here. She’s likable, and quite frankly I’ve started to root against Ozzy. The kid is just too arrogant. Yes, you catch fish and climb trees and are good in challenges and you should basically just move to Survivor and live there. But Redemption Island challenges? They’re practically carnival games, and I think Ozzy is overconfident when he says that it’s basically designed for him. Anyone could win these.

That said, yeah, Ozzy won. I was disappointed. The challenge was to balance stacked dishes on a wobbly arm. Dawn was out first, followed eventually by Whitney. But the upside? Now we get to see Ozzy and Cochran co-habitate on Redemption Island. I can’t be the only person hoping that Cochran pulls out the W, right?

Now, can we take a moment to talk about how much Redemption Island blows? I know I’ve talked about this before, but I was reminded of it again last night. I just really, really hate these weepy “I learned so much about myself on this delightful journey” departures from the game. I want to see people leave the game angry! Mad as hell! I don’t care that you’re proud of yourself! I care that you’re going to sit and stew in Ponderosa for days about how you got blindsided or backstabbed! This? What we get when people leave Redemption Island? Weak sauce.

(Also, when Whitney told Probst “My family is gonna be proud” before departing, how many of us followed that up with a “…Will they, though?” *raises hand*) 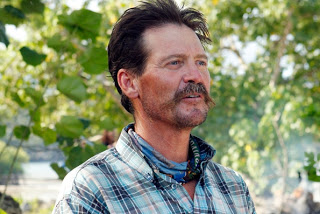 Back to camp! Apparently for the past several weeks, Survivor has forgotten to inform us that everyone thinks Albert is all kinds of lazy and they call him “Prince Albert” behind his back. Specifically, Rick calls him that. Y’all. You haven’t shown Rick utter a single word this whole time, and unbeknownst to us he’s been running around giving people unflattering nicknames? 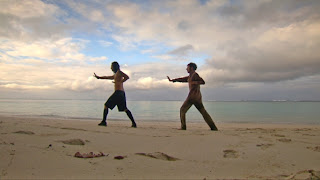 While Edna and Rick were bitching about Prince Albert, Coach and Cochran were on the beach doing “Coach-chi”. Really? “Coach-chi”? More like “Bull-Chi”. Coach was sure that with their mental and physical preparations, one of them was sure to win Immunity that day. (Cut to Albert winning Immunity while Coach and Cochran don’t even make it to the second round.)

This was one of only a few glimpses we’ve seen of Old Coach. So far this season, we’ve been seeing New Coach – he’s more strategic, knows how to handle the other players and rein in their emotions. But now he’s back to doing Tai Chi on the beach and saying that in sports and in Survivor he likes to find someone to mentor, that that’s what it’s all about to him. Really? Come on. It’s about winning a million bucks, let’s not lose sight of that. 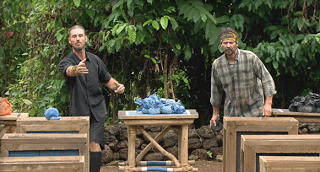 The Immunity/Reward challenge was kind of dull – the first three people to land three beanbags on three crates moved on to the second round. That doesn’t require much skill, you know? Albert, Rick and Sophie were the ones who moved on to the second round, where they had to use a slingshot to knock over three targets. Albert won, proving that lazing around all day and letting others do the work at camp means you can perform great at challenges. 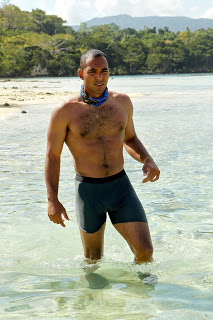 Albert’s reward was a shower and massage back at camp, and he selected Coach to join him. Then he asked Probst if he could choose a third person as well (kudos for asking that, sometimes it does work) and when Probst turned him down he offered to give up his own reward so that Cochran could have it instead. Doing this kind of thing is always a double-edged sword. On the one hand, it can curry favor with Cochran, who quite clearly will be on the jury at some point. On the other hand, it’s a pretty blatant attempt to do so and therefore can irk some of the other players. Everyone has to politic in Survivor, but you can’t be too obvious about it. Not only is Albert a huge physical threat in challenges, but people know that he’s been trying to butter up the jury. The target on his back is getting bigger and bigger. 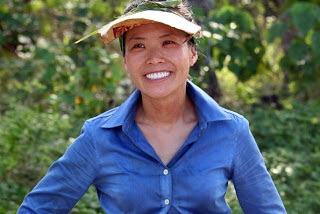 Knowing his elimination was imminent, Cochran went to work. He starts with Albert, telling him that Rick’s been running around calling him “Princess Albert”. It works brilliantly, and Albert is suddenly on board to vote out Rick if Cochran can get two more people to vote with them. So next Cochran heads for the next lowest man on the totem pole, Edna. She’s also game for voting out Rick – she’d been an idiot if she wasn’t, because Edna knows where she stands. But they need one more.

Was Coach the right person to approach? Probably, because he was originally in favor of “repaying the debt” to Cochran by keeping him around for another few days and they do Tai Chi on the beach together. Sophie and Albert have seemed tight in the past, but homegirl’s not a big Cochran fan and was in favor of keeping Edna over him – so it was doubtful that she’d be convinced to keep the pasty wonder over the silent cowboy Rick. And we all know that Jesus won’t let Brandon deviate from the original pecking order, so he was out.

It was a smart move, what Cochran did, and I honestly thought it had worked. My guess going into Tribal Council was that Coach would turn on half his alliance and vote out Rick. He likes Cochran, he likes Edna. I thought he’d stick with them. (That said, I didn’t really want it to happen. My mom has Rick in the Survivor office pool, which she created and has never won. I have Sophie, I have never won, and didn’t want to see her suddenly on the outside of her alliance.)

Tribal Council started out pretty normal. Cochran talked about how much it would suck to be voted out, and how humiliating it would be to see that his big move was all for not. Edna talked about how much it sucks to know you’re the next to go, to know that people have been lying to you all along and that you’re really not equal. And then Brandon chimed in with “I want to do bad things.”

Hold the phone. You know what? As Brandon was saying that, I was dining on delicious baguette and baked brie cheese with cranberry chutney. And you know what? It was SO EASY to make. And totally worth having. So there’s your proof – Brandon Hantz is one crazy dude. 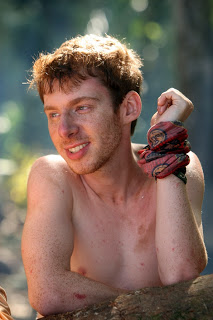 It was too bad the tribe wasn’t contemplating voting out Brandon instead of Cochran, because that outburst might have sealed the deal. “Talking strategy with Brandon is like talking to you about shirts that aren’t blue,” Cochran told Probst. (Best line ever?) Sophie and Albert agreed. But unfortunately for Cochran, the plan hadn’t been to oust The Crazy One, the plan had been to oust The Silent One. And when all the votes were read, Coach (and, therefore, Albert) decided to stick with the original alliance and sent Cochran to Redemption Island.

Are you excited to see that duel? Do you think Cochran stands a chance? I think he does, and I would LOVE to see him send Ozzy’s arrogant butt to Ponderosa. Sure, if it’s a mud wrestling match or a swimming race Ozzy will win, hands down. But what if it’s a puzzle or…or…a sweater-vest appreciation competition? Then the little guy might have a shot!

Survivor: He was the Sharon Tate of the situation
https://haligonia.ca/survivor-he-was-the-sharon-tate-of-the-situation-49968/