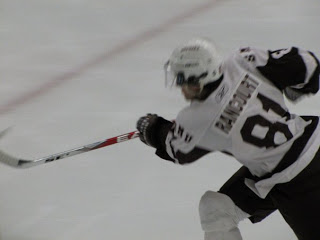 Photo Credit: Richard Lafortune
Rebuilding Tigers, Nationally Ranked Huskies, Mike Danton Have Made University Scene Fun Again
Over the years in Halifax, AUS hockey has taken a back seat in media attention and local support to basketball and Saint Mary’s Huskies football.
Despite being arguably the best conference in the country over the past decade, the league has not enjoyed the same following as the perennial powerhouse SMU football team, and university basketball bolstered by the AUS and/or CIS championships held each year at the Metro Centre.
Not this varsity season.
The AUS football season was “ho hum” to say the least, with the Huskies being the best of a bad lot that eventually got thumped by Calgary in a Uteck Bowl that failed miserably to live up to expectations.
The balance of power in AUS basketball has shifted decisively to the North with Saint Francis Xavier and Cape Breton being heads and tails above the rest of the conference. Add in the absence of championship basketball in March at the Metro Centre for the first time in decades, and the hoops hotbed that is Halifax is eerily quiet this season.
The AUS hockey conference picked the perfect time to have one of their more interesting seasons in years.
First, the SMU Huskies have been the sleeping giant of the AUS and everybody is waiting for them to start looking like a national contender.
Despite having played painfully mediocre with outstanding talent at all positions, the Huskies have been ranked in the top 10 all season. The Huskies seem to be on cruise control and waiting for the playoffs to start before turning on the jets.
The team is stacked with 2009 AUS MVP, Marc Rancourt (33 points), and high scorers, Cam Fergus (37), Cody Thornton (29), and Andrew Hotham (35). Throw in size with 6’7” Justin Wallingford, three players at 6’3”, and defenceman David Macdonald (28 points), and the Huskies are built for a championship run.
The addition of former NHL player and convicted felon, Mike Danton, has brought national attention to the Huskies and a great deal of interest from Haligonians. Danton’s first game at the Forum drew a crowd of 3700, many of whom couldn’t get into the game until the second period. They gave Danton a standing ovation when he scored the only Huskies goal in the third period of a 4-1 loss to the Acadia Axemen.
Speaking of Acadia, assuming the Huskies and Axemen meet in an AUS semi final as third and second seeds respectively, the teams could battle in the most interesting semi finals in years. An underachieving but lethally dangerous Huskies team, versus the overachieving, nationally ranked Axemen. Outside of UNB, Acadia has been the most consistent team in the conference and is gaining more and more respect each week across the country.
The winner would have to face the undefeated Varsity Reds in the AUS final but would secure a spot at CIS nationals.
Then there’s those feisty Dalhousie Tigers. Watching the Tigers is akin to watching someone run in mud. Despite a barrage of mistakes and goofs every single game, Dalhousie has been remarkably tough at the Dalhousie Memorial Arena and currently are 3 points up on the last playoff spot. It would be the Tiger’s first playoff appearance in over 5 years.
The Tigers have been blown out by the Huskies all season long, but tempers have flared between the two teams on a few occasions. The coaches, Trevor Steinberg of SMU and Pete Belliveau of Dal, went face to face after the game in a heated argument that spilled out to the locker rooms of the DMA. Belliveau was not happy about Steinberg using his #1 power play line while leading 6-1 late in the third period. 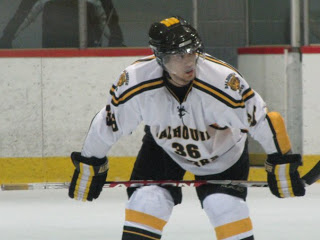 Benjamin Breault has been an offensive catalyst for Dalhousie (Photo: Richard Lafortune)

Although the Tigers shoot themselves in the foot constantly during the course of a game, they play hard and have pulled out a number of gutsy wins over Saint Francis Xavier and had a huge upset win vs. Acadia on a thrilling third period comeback.
The Tigers have also received a lot of attention with the recruitment of Bobby Nadeau, the former QMJHL goaltender who was involved in the Jonathon Roy fight from several seasons ago that received national coverage.
Nadeau and Josh Disher have been solid in next for a Tigers team that is out shot badly nearly every game.
Dalhousie also added their first stud recruit in the form of Benjamin Breault, a former draft pick of the Buffalo Sabres. Breault has been with the team since the New Year and is averaging just over a point a game while bringing some much needed excitement to a team that was desperate for a playmaker.
If the Tigers hold on to the last playoff spot, and it should be fun watching them try (the team barely showed up for a critical home game vs. Moncton this past weekend), Dalhousie would play SMU in an opening round playoff series that would be very interesting to watch.
Can the Tigers beat the Huskies?
No. But it would be the first step to restoring a rivalry that has been sorely missed in the Halifax hockey scene the past 6 years.
So fear not local AUS enthusiast, even though the Uteck Bowl was a bummer, and we have no championship basketball at the Metro centre, AUS hockey is here to save the day. An already exciting season should really heat up as we head towards spring.