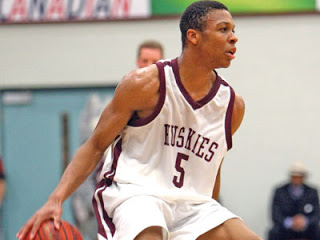 Joey Haywood averaged over 20 ppg this past season for the Huskies.

Counting down the top twenty storylines of he 2009/10 season, Joey Haywood’s foul on Christian Upshaw in the AUS Semi Final comes in at number three.
It was maybe the most stunning call in AUS Men’s Basketball playoff history. Considering the rich and decorated past of the annual classic, it’s hard to believe, but possibly true.

Joey Haywood was called for a personal foul on Christian Upshaw on a shot that had little chance of counting, a wild heave from the hashmarks at the buzzer that would have almost certainly missed it’s mark and given the Huskies another trip to the AUS final.

The game was a classic before the ball was tipped.

It was the semi final game in Syndey, the latest chapter of the intense rivalry that exists between the Saint Mary’s Huskies and the Saint Francis Xavier X-Men.

Two of the best coaches in Canada were waging war once again. On one side, Steve konchalski, on the other, Ross Quakembush. Coach K and Quack matching wits one more time with everything on the line.

For AUS basketball enthusiasts, the teams were a delicious contrast of styles.

The X-Men were one of the most athletic teams in the country and excelled at full court basketball, trapping, pressing and fast breaking their way to the number two ranking in Canada. Christian Upshaw and Jonathon Silver comprised one of the best backcourts in the country. Combined with Charlie Spurr and an eclectic mix of dynamic athletes and pure shooters, the X-Men were poised for a national championship run.

The Huskies were a classic Quakenbush team. A stellar senior class consisting of 5th year standouts Mark Mcluaghlin and Ike Ichegbu. A scoring dynamo in Joey Haywood, and a team concept based on half court offensive precision that always seemed to give the Huskies a wide open look at the basket. Basketball purists could watch Saint Mary’s run their half court passing game all day long.

The X-Men and Huskies waged an epic battle in front of a spirited crowd at Sydney 2000. The Huskies seemed to be in control with 5 minutes left and leading by 9, but Konchalski’s X-Men clawed their way back and the teams came down the stretch of the AUS semi final neck and neck.

The Huskies looked to have it won when Mclaughlin found Miguel Pink with a full court pass for a wide open layup with 6 seconds left. The Huskies began to celebrate prematurely as Upshaw took the inbounds pass and navigated his way just over midcourt.

As time was set to expire, Upshaw found open space with Haywood in hot pursuit. Upshaw elevated and fired a wild buzzer beater that didn’t seem to have a prayer.

Sure enough it didn’t. It was jubilation for the Huskies, they were going to the AUS final having upset the heavily favoured X-Men.

But just wait. A whistle was blown on the play. As Huskies fans and players stood with their mouths agape, a three shout foul was called on Haywood. Replay would show that Haywood had made the slightest of contact with Upshaw on the body, as the dynamic guard from Halifax was at the climax of his jump.

Shock, despair, anger. All the emotions hit the Huskies at once.

On the other side, unabashed jubilation from X-Men players, fans, and the vaunted X student section.

Christian Upshaw stepped to the line, calmly made 2 of 3, and the X faithful charged the floor as the final free throw found it’s way to the bottom of the net.

It was devastating for Saint Mary’s. The outstanding seniors, Ichegbu and Mcluaghlin, having their legendary careers come to a finish in the cruelest of ways.

Then there was Haywood, one of the best guards in the country, left to ponder a mistake for the ages. Regardless of whether or not it was the correct call, Haywood will ask himself all summer why he was so close to Upshaw as he released a shot that barely stood a chance.

Haywood’s mistake serves as a reminder to all of us that these are just young men. Brilliant at times, careless at others.

It was the ultimate case of the tragic beauty of university sports. Highly skilled and brave athletes pushing themselves to limits none of us could ever imagine, performing incredible feats of skill. Yet always tempered by the most costliest of errors, historic blunders that just leave you shaking your head.

But your heart aches with empathy for the agony you know they must be feeling to lose a game in such a fashion. Saint Mary’s deserved a far greater fate, and to this day Huskies nation is still bitter about a call they feel should never have been made.

St FX would go on to lose handily the next day in the championship game. As it would turn out, both teams would see their season end it heartbreak as the X-Men did not receive a wildcard berth to the CIS championships in Ottawa.

But in a year that saw Cape Breton dominate the men and women conferences, it was this historic game featuring the most controversial call in the history of the tournament that was the top storyline of AUS basketball in 2009/10.

AUS Storyline #3; The Shot Heard Round The Maritimes
https://haligonia.ca/aus-storyline-3-the-shot-heard-round-the-maritimes-15890/