Renowned Newfoundland author Paul Butler will be in town Tuesday November 10th, 7:00 p.m. at the Woodlawn branch of the Halifax Public Libraries to read from his latest novel, Hero.
Paul has crafted a mesmerizing novel, dealing revenge and forgiveness, appearances versus reality, love and losses and the far reaching costs of war.
Please join us at the Woodlawn Library to meet Paul and to hear him read from Hero.
“Paul is a great writer and a gifted storyteller” – Donna Morrissey
“a fine example of Newfoundland storytelling” – Farley Mowatt 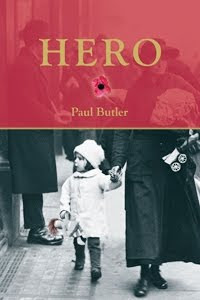 Here is the publisher’s description:
“In a St. John’s hospital in 1945, Elsa Evans keeps a furtive vigil over the deathbed of Abram Kean, the renowned sealing captain. Remembering her first husband and her two brothers killed in the trenches thirty years before, and another young friend, Noah, frozen on the ice during the sealing disaster of 1914, Elsa contemplates a hideous revenge. The shock of her own bitterness forces her to retrace part of her life which is interwoven with those of her former employers, Simon and Sarah Jenson.
On the morning of July 1916, officer Lt. Simon Jenson, severely shell-shocked and demoralized after a year and a half in the trenches, fails in leadership, hanging behind his men as they march through into no-man’s-land. When a figure emerges from the drifting smoke, he thrusts the blade of his bayonet forward not into the enemy but into the body of Charles Baxter, a comrade and the brother of his fiancée, Sarah. Surviving against the odds, and with his battlefield actions misinterpreted, Simon is feted as a hero. But when Simon returns from the war, Sarah finds him emotionally fragile and prone to violent rages—not even their young daughter Lucy can cheer him. Worse, their lives are soon overtaken by the shadow of blackmail, and Sarah and Elsa, Lucy’s governess, are forced to reconsider everything they once believed about loyalty, valour, and responsibility.“
Paul Butler is the author of several critically acclaimed novels including 1892, NaGeira, Easton’s Gold, Easton, and Stoker’s Shadow. His work has appeared on the judges’ lists for Canada Reads and he has been a winner in the Government of Newfoundland and Labrador Arts and Letters Awards four times since 2003. A graduate of Norman Jewison’s Canadian Film Centre, Butler has written for the Globe and Mail, the Beaver, Books in Canada, Atlantic Books Today, and Canadian Geographic, and has also contributed to CBC Radio. He lives in St. John’s.