For the last year of so, British graphic-novelist Warren Ellis has been penning a weekly web comic. Free online at www.freakangels.com, the story is both a compelling read and a great introduction to his style. Many of his stories, including FreakAngels have involved at least one of three elements, as follows: 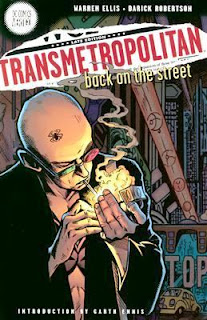 1) Science Fiction.
Transmetropolitan is a short series that takes ‘gonzo’ journalism (see Hunter S. Thompson) and sets it in a cyberpunk dystopia. Ultimate Galactus marks a significant turning point in Ultimate Marvel Comics; the world’s super-heroes unite to defeat a planet-devouring threat. In the first season of the animated Justice League Unlimited, he penned the epic episode ‘Dark Heart’, which focused on nanotechnology gone awry. His sci-fi is aggressive, both in story and visuals, and tends to involve difficult moral questions. 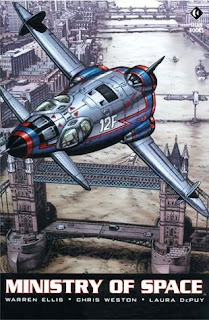 2) Britannia.
Ellis, like his peers Alan Moore and Neil Gaiman, typically sets his tales in Britain or America, but it’s the stories in the UK where he really shines. FreakAngels takes place a few years after a world disaster, in a ravaged and semi-savage London. Opposite to that dark future, Ministry of Space shows a world where England won the space race over Russia and America, and became a dominant world power. 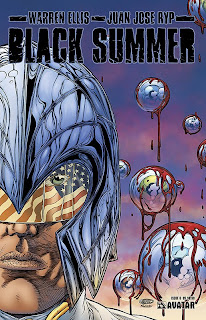 3) Super-heroes.
Having cut his teeth on Marvel and DC stories, he went on to scribe such series as Planetary, the Authority, NextWave: Agents of H.A.T.E., and Black Summer. Each deals with the super-hero milieu in a different tone, either mocking or questioning. In Planetary, key figures from both Marvel and DC are subtly parodied against the backdrop of super-hero conspiracy. Authority is a more typical genre story, much more serious and decompressed. Next Wave is simply ridiculous, full of high action and over-the-top satire. Black Summer, however, is bleak and uncompromisingly gory.
Like many modern graphic-novelists, Warren Ellis shows a clear understanding of his genre and explores it with gusto. His work can be recommended to fans of sci-fi, super-heroes, and action-adventure, and definitely for a mature reader.