The Edgar Awards celebrate the best in crime writing. Listed below are the five titles nominated for the 2012 Fact Crime award. Enjoy.

Girl, Wanted: the chase for Sarah Pender (M)
by Steve Miller
“Sarah Pender was an attractive, outgoing, intelligent woman with great potential. But the straight and narrow had no appeal for this depraved young woman dubbed “the female Charles Manson”, who knew how to get what she wanted from men-even if it meant murder.” – Publisher
The Murder of the Century: the Gilded Age crime that scandalized a city and sparked the tabloid wars (M)
by Paul Collins

Collins, the literary detective often featured on NPR’s Weekend Edition, has constructed a gripping work of narrative nonfiction. He revisits 1897 New York, where the discovery in the East River of a male torso with arms was first dismissed as a medical-student prank. But other findings of body parts soon convinced experts that a grisly murder had been committed. The public became galvanized by the horrific crime, in large part because of the spotlight turned on the case by the two masters of yellow journalism, William Randolph Hearst and Joseph Pulitzer. Collins shows how the press sensationalized both the crime and the hunt for the murderer.
More than a good true-crime story, this is absorbing social history, especially of the tabloid press of the time, including good portraits of Hearst and Pulitzer. Collins was able to draw on many eyewitness accounts as recorded by the contemporary press, which add greatly to the book’s immediacy. “ – Booklist
The Savage City: race, murder, and a generation on the edge (M)
by T.J. English

“*Starred Review* In Manhattan in August 1963, two white women were hacked to death in a crime the tabloids would call the Career Girls Murders. The police picked up a near-blind 19-year-old black youth and spent hours pressuring him into confessing to the crime. George Whitmore would spend the next decade fighting the setup as police and prosecutors persisted in what they knew to be a miscarriage of justice. That same decade was the most violent in the history of New York City, with escalating racial tension between the police and black nationalist groups. Acclaimed journalist English profiles Whitmore, as well as Bill Phillips, a brazenly corrupt second-generation NYPD cop, and Dhoruba bin Wahad, a gangbanger turned Black Panther, to present an epic look at the racial animus, fear, and hatred that characterized that troubled decade.” – Booklist
Destiny of the Republic: a tale of a madness, medicine and the murder of a President (M)
by Candice Millard

This rendering of an oft-told tale brings to life a moment in the nation’s history when access to the president was easy, politics bitter, and medical knowledge slight. James A. Garfield, little recalled today, gained the Republican nomination for president in 1880 as a dark-horse candidate and won. Then, breaking free of the sulfurous factional politics of his party, he governed honorably, if briefly, until shot by an aggrieved office seeker. Under Millard’s (The River of Doubt) pen, Garfield’s deranged assassin, his incompetent doctors (who, for example, ignored antisepsis, leading to a blood infection), and the bitter politics of the Republican Party come sparklingly alive through deft characterizations. Even Alexander Graham Bell, who hoped that one of his inventions might save the president’s life, plays a role.
Millard also lays the groundwork for a case that, had Garfield lived, he would have proved an effective and respected chief executive. Today, he would surely have survived, probably little harmed by the bullet that lodged in him, but unimpeded infection took his life. His death didn’t greatly harm the nation, and Millard’s story doesn’t add much to previous understanding, but it’s hard to imagine its being better told.” – Publisher’s Weekly
The Man in the Rockefeller Suit: the astonishing rise and spectacular fall of a serial imposter (M)
by Mark Seal 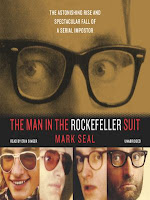 “*Starred Review* Prepare yourself for one of the most intriguing, compelling stories of audacious criminality you’re likely to read this year. In 2008, Clark Rockefeller, of the wealthy Rockefeller family, was arrested for kidnapping his daughter. But this criminal act was quickly overshadowed by some more startling revelations: Clark Rockefeller doesn’t exist. He was the creation of Christian Karl Gerhartsreiter, a German immigrant who came to the U.S. in 1978 and built for himself a series of fake identities, including Christopher Mountbatten Chichester, descendant of Lord Mountbatten, and Christopher Crowe, a television producer. But Clark Rockefeller was by far his finest creation, an identity he used for more than 15 years, including a 12-year marriage to a woman who was unaware of the deception (although, to be fair, there were plenty of hints that something was not quite right about Rockefeller).
The book is a chronological account of Gerhartsreiter’s life, dating back to his early childhood (when, as a teenager, he posed as other people as pranks), and it’s a deeply fascinating story. Gerhartsreiter is a con artist, no doubt, and there is some suggestion he might be a murderer, too, but he is also an undeniably personable and persuasive fellow. It is impossible to read the book without getting caught up in his story on an almost hypnotic level. Full marks to author Seal, too, for making this true-life story as suspenseful as any crime novel” -Booklist