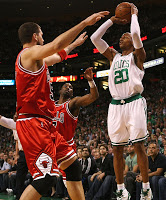 \Is Ben Gordon tough? Killin the Bulls with triples right now, Bulls lead 32-23. Responding for the Celts? Who else but Brian Scalibrani!! Wow. What an incredible block by Derrick Rose on chicken Scalibrani on the breakawaay dunk attempt. First of all i did’nt know that Brian could jump higher than me, but Rose’s block was just another example of how much more athletic the Bulls are than the Celts…..Rose, Gordon, Salmons, Yannick’s kid, Tyrus Thomas, the Bulls have alot of athletes. How many pure athletes do the Celts have? Leon Powe and Kevin Garnett….except they are both injured. Even Paul Pierce is a little slow afoot. Celtics have alot of weird looking guys. Rondo, Scalibrani, Kendrick Perkins, and especially Glen Davis. He may have the strangest NBA body I’ve ever seen. He literally looks like a big baby.

Well that was simply disturbing. After Gordon put the Bulls up 32-23, the Celtics went on a 28-6 run to finish the half….I forgot how the Celtics are able to clamp down on defence….every possesion for the Bulls looked so painful. It didn’t help that they overdribbled and stopped moving the basketball, but Boston’s defence was tight…..Yannick’s kid looks like me if I was 7’0″ tall. No discernable skills to speak of but just lots of hustle, screens, and rebounds…..not sure why Del Negro got away from Tyrus Thomas, i liked the combo of Thomas and Noah much more than Noah/Miller….John Salmons will be back in the second half (3 fouls) and should give the Bulls a boost….Del Negro was saying he didn’t feel like a rookie coach after all the team has gone through so far in this series, but he looked like a rookie coach in that first half. Any proven NBA coach would have called a timout as things were unravelling and called a play that would get the team an easy basket and back on track (see Larry Brown). Every possesion the Bulls had in the last 8 minutes looked awful, literally every possesion.

If I’m Del Negro I’m going with Rose/Gordon/Salmons/Thomas/Noah as much as possible the rest of the way. Hinrich is not looking comfortable (those two missed foul shots were a killer), and Miller brings the team down in athleticism. Get those young athletes out there, move the ball, try to get open looks for Salmons and Gordon, and hope that Noah/Thomas can really outplay Perkins and Davis….Tim Thomas has really dropped off the earth, hard to believe he can’t be a contributor on the Bulls, he was great for the Suns a few years back when they had lost Stoudamire for the playoffs.

Doug Collins is the best analyst for making a really great point, and then beating it to death! Right now he’s stuck on the Bulls not moving the ball. My favorite Doug Collins regular point of emphasis, “The last 2 minutes in each quarter is so important, you want to make sure you get quality shots.”

Well, I still like the Thomas/Noah combo better, but, Brad Miller does spread the floor with his jump shot and brings alot of poise to the floor with a young team. I guess it’s match ups…with Perkins and Davis I’d rather have Thomas/Noah, but with Scalibrani you can afford to take an athlete like Thomas off the floor in favour of the seasoned vet, Miller (who just made a tough layup to cut the lead to 7 before a Paul Pierce dunk!) The dunk by Pierce is an example of how Miller hurts you. There’s no way Pierce gets around Noah or Thomas coming off that screen, but Miller is just too slow.

I love Ben Gordon, but I do not like to watch him drible for 10 seconds and force a jump shot. Derrick Rose is so tough you’d think he had played at UCONN…..it seems like every shot Ray Allen takes find the bottom of the net. Is it just me?
My god Glen Davis is weird looking!
Why isn’t big game Marv Alberts calling this game? Kevin Harlan is ok, but you got to have Marv for a game like this.
Yannick’s kid has to finish stronger! He misses alot of potential and1’s.
Game I don’t care about: Atlanta/Miami game 7
Series I’m looking Forward to: Houston vs LA. Kobe vs Artest..love it.

Well the Bulls punched back and got to within 7 to start the 4th quarter. I’m cheering hard for the Bulls, I like all the youth and athleticism. Boston vs Orlando? Meh. Chicago vs Orlando? Not bad……I’d love to see a Cavs/Bulls eastern conference final.

With the exception of the Heat in ’06, it is really hard to knock an NBA champion out of the playoffs. It is not easy to win an NBA championship, which is why the Celtics, Lakers, Bulls, and Spurs, and Pistons account for about 80% of them. Any team that wins an NBA championship is tough, so trying to beat them 4 times the next season is hard, probably too hard for a young Bulls team…..speaking of age, I can’t believe Lindsay Hunter is still playing. I remember when he was the next Isiah Thomas for the Pistons in early nineties!

Celtics win by about 8. Too many scoring droughts for the Bulls. That’s a game they could have had. They just have too many mental lapses and get away from doing the right things. I thought the Bulls coaching staff did a poor job. They didn’t seem to have any way of getting the youthful Bulls back on track offensively during periods where they really seemed to lose their way. Overdribbling by Gordon and Salmons for sure. Noah getting into foul trouble didn’t help.
Ray Allen is a mean man. He and Paul Pierce may be the most mentally tough duo in the NBA. Kirk Hinrich came on in the 4th quarter as well, showing that Jayhawk products are pretty tough too!
Eddie House had a great game, although he travelled on that last three pointer, and he gave the Bulls 3 points on foul shots via a technical and a bad foul. He’s another guy who ain’t pretty to look at. Let’s face it, the Celtics are an ugly, ugly team. Not too watch, because they do play good team basketball, but to look at…they are ugly. I wonder what Brian Scalibrane would be like if he wasn’t fat? He might actually be a really decent player instead of a spot up shooter.’
Celtics/Magic? I’m taking the Magic in 7, just because they are healthier and have no one who can match up with Dwight Howard. But as I said, it’s hard to beat NBA champs 4 times in two weeks.
Intriguing series that’s kind of under the radar? Mavs and Nuggets. Mavs have been one of the better teams in the association the past couple of months and the Nuggets are a team that have really found their groove. Chauncy Billups has been a perfect fit to that team. One great thing I like about the Nuggets? After last year’s pathetic exit in the playoffs, they decided to fix things by changing personnel, not the coach. They realized that George Karl is a great coach, he just needed a different group. Thus, Iverson out, Billups in, and the Nuggets are looking like a team that could compete with the Lakers.

Ranking the Top Playoff Matchups in the NBA/NHL
So both the NBA and NHL are in the second round. Here are my rankings for the two leagues combined. #1 being the series that I’ll plan my week around to watch, #8 being the series I doubt I’ll look at too much.
1. Capitals/Penguins-By far the most intriguing series in both leagues.
2. Ducks/Red Wings-Game 2 tomorrow will be perfect sunday afternoon entertainment.
3. Lakers/Rockets – Kobe vs Artest, Adelman vs Jackson, Yao vs ….Gasol??? Well, it’s got Kobe and Artest.
4. Canucks/Blackhawks- Chicago blew out Vancouver at GM Place, will be interesting to see how Luongo responds in game 3.
5. Mavs/ Nuggets – Series has a relevancy problem, as I’m not sure either team could beat the Lakers next round. But should be fun. up tempo ball.
6. Celtics/Magic – Magic should win if “master of panic” Stan Van Gundy keeps his cool.
7. Cavs/Hawks- I like the Hawks, but Cavs should win in 5 at the most.
8. Hurricanes/Bruins – Bruins will sweep. 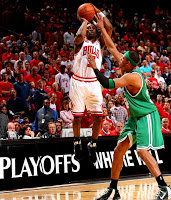